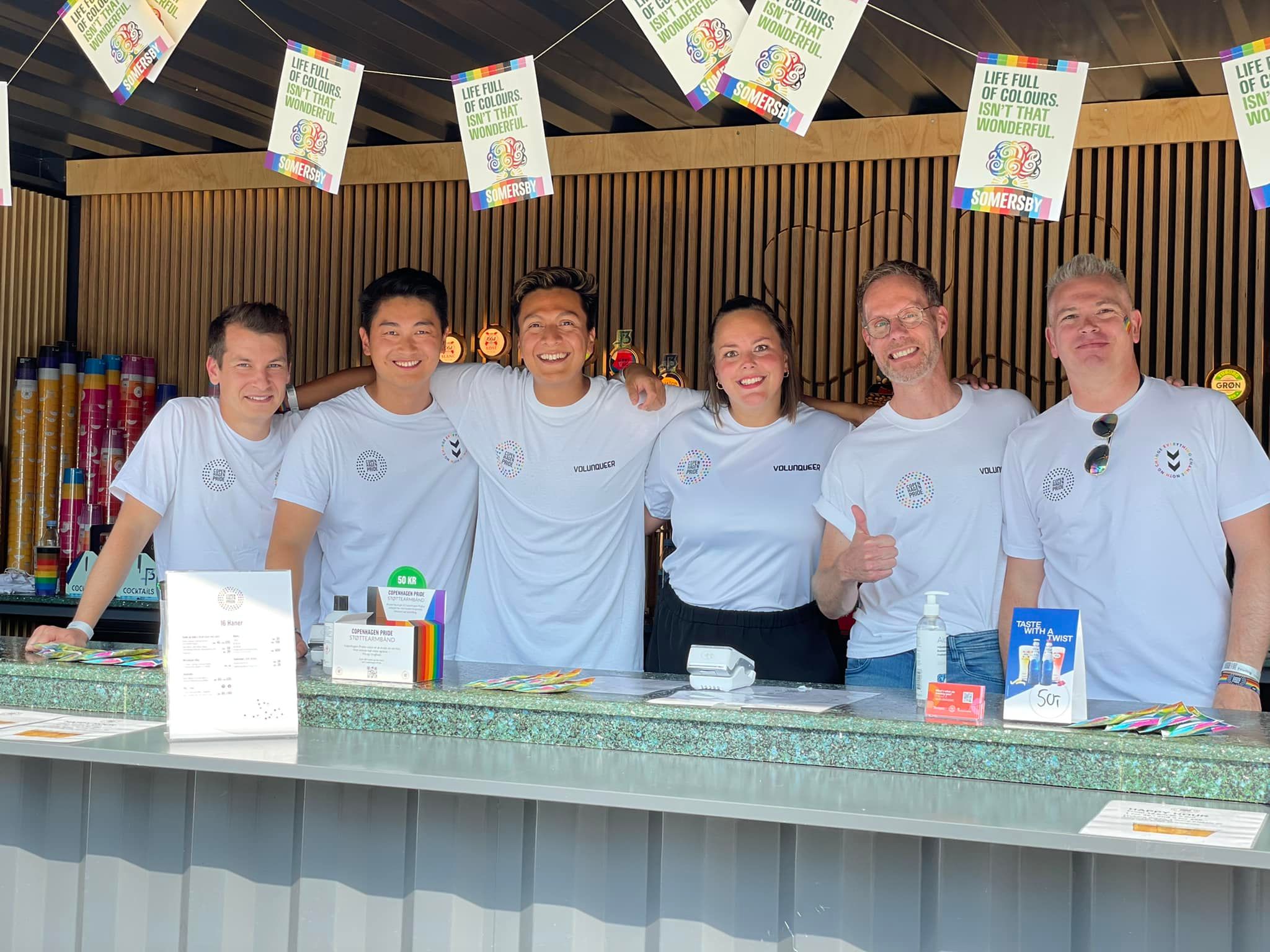 It is the volunteers who are the driving force behind Copenhagen Pride – and this year, we have seen an incredible amount of hard work to deliver an ambitious event.

There is not a lot about Copenhagen Pride that can be said to be ‘how we usually do it’. A lot has happened since the last full-scale event in 2019 – the corona pandemic forced the organization to change plans in 2020 and last year Copenhagen and Malmö hosted the mega event WorldPride. This has meant certain challenges, for instance how to best recruit, activate and care for the volunteers, who are an integral part of creating these events.

As it turns out, there has not been a lack of neither will nor eagerness to do the work – on the contrary, lots of passionate people, some new to the organisation and some familiar, were ready to sign up. But that also meant that a proper system was needed to make it simple and manageable for both the volunteers and the coordination team, led by Head of Volunteers Mette Willenbrock Hattens.

The answer to that challenge turned out to be named Mark Bjærgager. Last year, Mark reached out to offer the use of his volunteer software, CrewPlan, to Copenhagen Pride, and this has since blossomed into a great collaboration, which is far from over.

“CrewPlan was developed in 2018 in collaboration with a large number of organizations and municipalities, which has made the platform so flexible that it could easily support Copenhagen Pride’s major event. We are incredibly proud of the collaboration and look forward to supporting the incredibly important work that Copenhagen Pride stands for for many years to come.” Mark Bjærgager, CrewPlan.

The framework was put into place, the volunteer shifts were created: hands were needed in all areas from bars, check-in, building, hospitality, cleaning, parade, and more. When all was said and done, 1,030 shifts were covered, which amounted to about 7,000 hours from 13-21 August. All 100% volunteer work.

“The number of volunteers this year has been exceptionally high and has exceeded our greatest expectations. We are so proud and grateful for the enthusiasm, spirit and joy with which our volunteers have gone to the various tasks throughout Pride week. We must have Denmark’s best volunteers and without them we would not be able to deliver such a big event as Copenhagen Pride. So a huge thank you to all our volunteers.

The fact that we have got CrewPlan to keep track of all the volunteers and the many shifts that had to be covered has been a great advantage in relation to the overall overview, and the system has given us the opportunity for good and quick communication with our volunteers both before , during and after the Pride.” Mette Willenbrock Hattens, Copenhagen Pride

With over 900 users on the CrewPlan platform, Copenhagen Pride more than doubled the expected number of volunteers this year. It goes to show that Pride is still an organisation and an event that people want to support, not just with their participation, but with their time and energy. It is an invaluable facet of Denmark’s biggest human rights event and a key area to build on in the future.

The good partnership between Copenhagen Pride and CrewPlan is now headed for a tour of Europe. This October, Mark and volunteer coordinator Julie Rosenvinge Jensen will join the board of Copenhagen Pride for the European Pride Organizers Association general assembly in Turin, where they will get the chance to relay our experience, good and as well as constructive, to a number of other European Prides.

As far as Copenhagen Pride is concerned, there is much to celebrate about having found a sustainable volunteer system after years of trying out different platforms. More than anything, it is greatly appreciated to know that the Volunqueers are continuing to provide the driving force behind Copenhagen Pride – it would not exist without them.