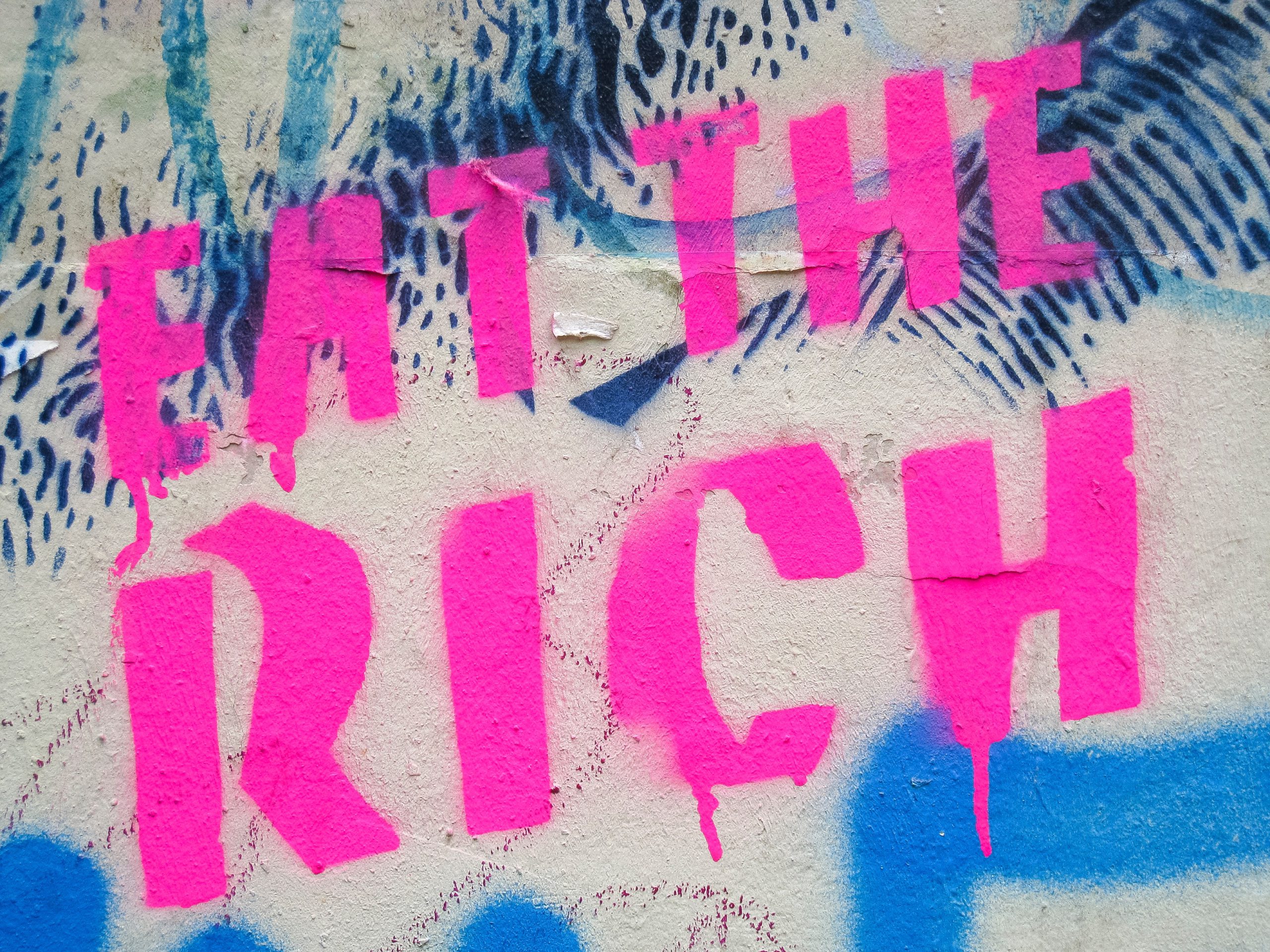 Eating the Rich: An Origin Story

“Hunger is a feminist issue, just as it is class issue, and that no matter what anyone tries to tell you, it is not your fault that you live in a broken system, and we all have basic human right to eat.”

We’re here, we’re queer, we are once again asking you to consider hunger not just a class issue, but a feminist issue, and remember that the right to eat (the rich) is a tale as old as time.

I bet you’ve heard it before: eat the rich. Seize the means of production. Stand up against the oppressive structures. Vive la revolution. And it really is such a lovely concept. Challenging oppressive structures is undoubtedly at the heart of the LGBTI+ spirit. But what does it mean? Where does one start? I suppose one could start by thanking Jean-Jacques Rousseau who is commonly attributed with creating the phrase “eat the rich.” Rousseau was a fierce critic of modernity and society which can be seen in his works, such as Discourse on the Origin of Inequality and The Social Contract. But it was not until after his death in the late 18th century that Adolphe Thiers used Rousseau’s words in his ten-volume History of the French Revolution to summon up the spirit of said revolution: “When the people shall have nothing more to eat, they will eat the rich.” For as it turns out, even when you smash the Bastille, behead the king, and pass the Declaration of the Rights of Man and Citizen through the National Assembly, the freedom and civil liberties that come from that will not keep you or your family fed. In 18th century France, despite having taken serious steps toward a more egalitarian society, French citizens started to realize that vendors were still only selling moldy bread and old meat to the common folks and saving their good wares for the upper classes. Which was outrageous, had no one told them that true equality (and the guillotine) had come to stay? Honestly, actively playing into the feudal society was, like, so 1788.

If we accept Rousseau and Thiers’ roles in marking the spirit of the French Revolution as one of “eating the rich”, it’s no big stretch to say that the “Eat the Rich” movement as we know it today originates from the French Revolution. But more importantly, “eating the rich” is not just about redistributing wealth and communist ideology (although that is a big part of it). At its core, “eating the rich” is about being able to eat decent food that won’t actively poison you, even after you put in the work and revolutionize an entire goddamn country. It’s about being afforded basic human rights that the upper classes are gaslighting you into believing you don’t deserve by just existing, but rather you should earn the right to not go hungry by pulling yourself up by your bootstraps.

It was author Mikki Kendall who said it best when she said, “True equity starts with ensuring that everyone has access to the most basic of needs.” The only immediate issue here is that the above-mentioned quote is from Kendall’s book Hood Feminism which was published in 2021, and not written by a long-dead 18-century revolutionary. Perhaps the better question is, why are we still having to fight to cover the basic needs of everyone? In Kendall’s book there is an entire chapter dedicated to why we should consider hunger a feminist issue. She points out that in America, there is only a certain type of food available to you, if you belong to a certain income bracket. That food is often highly processed and considered ‘fattening’, creating added stigma to what you can afford to eat. This has often prompted the question “why don’t people just prioritize eating less processed foods?” Well, we can start with the fact that America is infamous for its food deserts, but even besides that it does not matter if there is a store right next to your house when you can’t afford to shop there. More importantly, something that is highly processed will often have a longer shelf life and be much more affordable than a farm-fresh, organic vegetable which will go bad after a week.

Moreover, if you live in an area where the water is also contaminated so you can’t drink from the tap, it is in many instances actually cheaper to buy soda. Juice is often suggested as a healthier option to soda, but soda is comparatively cheaper and soda manufacturers always thoroughly filter the water at their factories. More importantly, because of the high sugar levels and airtight packaging soda is at a much lower risk of going bad, unlike juice, where we have seen brands such as Capri-Sun send moldy juice onto the market because of poor packaging.

So, why is it that the rich get richer, have access to drinkable water, and freshly grown foods, while poor people must fight for government programs like The Supplemental Nutrition Assistance Program (SNAP) to stay open? The short answer to the latter question is that it is believed that charity organizations can and should help the ‘unfortunate’ in society and help distribute food and aid. However, charities rarely have the funding or the personnel available to make as big an impact for as many people as government programs can. Now, as to why the rich get richer? There are a lot of components to that, but let’s start at passive income. For simplicity’s sake, we will stick with America as an example, but more specifically: Mackenzie Scott. Mackenzie Scott is an evergreen example of the absolute, undeniable economic convenience of passive income, for the simple reason that no matter how much money Scott gives away, without having an actual active income, she seems to get richer by every fiscal year. Mackenzie Scott got 4% stock in Amazon in her divorce from Jeffrey Bezos in 2019, which afforded her a net worth of roughly $60 Billion. Despite Scott giving away over $8.5 billion in donations to charities and NGOs in 2020, by 2021 her fortune had increased by $1.31 billion. This comes down to the fact that Amazon reached an all-time high net worth of $1.7 Trillion during 2021. With an ever-rising Amazon stock, Scott virtually cannot spend money faster than she is earning them. That is of course not to say she has not made a valiant effort, having also ensured that her 8.5 billion dollars were only donated to female-led charities, food banks, and black colleges, to name a few.

However, Scott is not alone in her altruism. Several billionaires have signed the ‘Giving Pledge’ wherein they promise to give away at least half of their wealth in their lifetime. Of course, if you remove fifty percent from a crapload of money, what are you left with then? Still a crapload. Ultimately, one might look at concepts such as “The Giving Pledge” which aims to improve the world through philanthropy and wonder if the generous people who created and participated in this pledge, are not the very reason that we need it. With vague, generalized promises of altruistic donations worth half a billionaire’s cumulative worth, the future of charities is looking good, so why can’t they take over fixing hunger? It could be argued that donations rarely happen fairly, nor are they distributed fairly. Have you ever tried to apply for a scholarship or some kind of financial aid for an organization or for yourself? Then you know it’s not exactly a stroll through the woods (unless those woods are Mirkwood). More importantly, as we touched upon earlier, governments have a much better capacity for reaching a broader range of people and have the necessary information to ensure that all those who need aid will receive it. In fact, there are theories such as Modern Monetary Theory suggesting that we essentially print more money and have the government invest them in necessary things like roads and schools, thus using and investing the money without flushing the market with a surplus of capital. Hereby, we eliminate the need to rely on the ultrarich to fix the world’s problems. However, the market will inevitably be affected by the invested money. Example time: Jolene, everyone’s favorite construction worker, got a job fixing the new roads, so she is finally making a good income. Therefore, she is buying a bit more food and maybe a nice new axe with her disposable income, because she is an adult with adult money, and what kind of woman does not own an axe anyway. When this happens, the government will raise taxes to stave off inflation. As such, the market will not have to raise the prices of food and other wares, because with the higher taxes it means less disposable income for Jolene. However, instead of Jolene’s previously disposable income going into the hungry caterpillar pockets of capitalist billionaires, they go back into the government’s pockets, so they can afford to hire Jolene for another project.

There are many suggested solutions for fixing world hunger, and if you like, you can take an entire university degree in Philanthropy and learn how to be a giving person yourself. But if you take anything from this article, please let it be this: Eating the Rich, while a fun pastime, can be traced all the way back to 18th century France where it inspired a revolution because people were tired of being told they did not deserve to eat simply because of their social class. Eating the rich can be traced all the way up to modern day society where people are still going hungry and are being told that that hunger is their own fault, since they could just buy better food, and if they need more money, they can just put in the effort and pull themselves up by their bootstraps. Perhaps now is a good time to realize that no one is coming to save us. We certainly can’t rely on the altruistic billionaires, who are complicit in creating these issues in the first place, to come save us. Perhaps we could stop expecting charities and private stakeholders to donate their time, money, and possessions to fix the gaps in society, and instead rely on innovative economic methods to give us the necessary opportunity to distance ourselves from relying on billionaires. Perhaps, if nothing else, we can take this opportunity to remember that hunger is a feminist issue, just as it is class issue, and that no matter what anyone tries to tell you, it is not your fault that you live in a broken system, and we all have basic human right to eat.