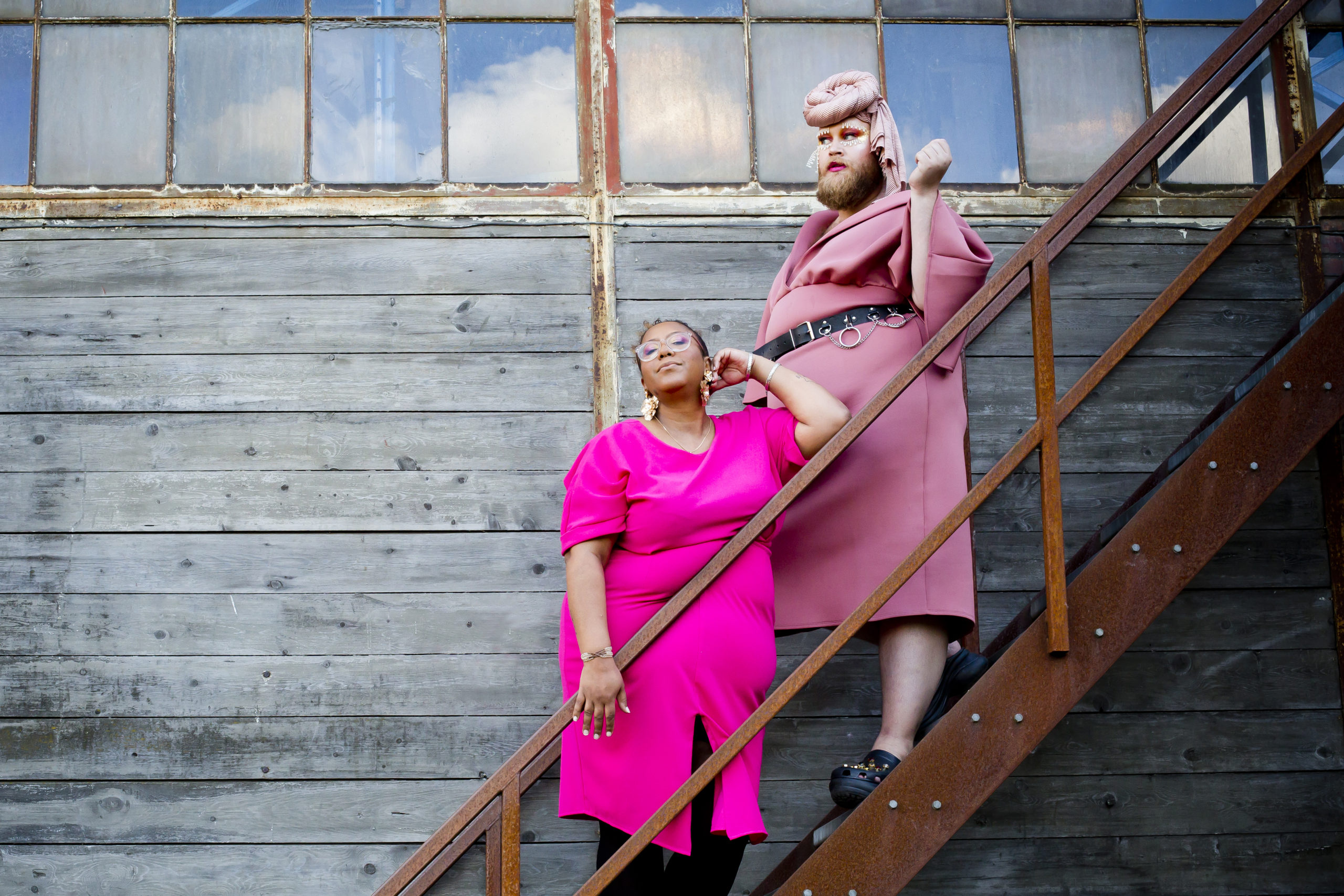 A Personal Essay About Being Fat and Queer

We talk about safe spaces the same way we talk about the menu at an event. It’s another thing on the long list of things we need to remember, when planning a big gracious event, but do we ever stop to think about what a space being safe actually means? If you’re facing oppression on more than one front, you’ll know what I mean when I say that we’re never safe. Because the fact is that our community is so obsessed with beauty that the moment a fat body, like mine, enters an LGBTI+ space, it’s judgment time, and then what does it mean when the invitation says, “it’s a safe space”? Because it’s not safe for me.

My first encounter came early in life. I had just come out, 15 years young, and a friend of mine told me that no man would ever love me if I were feminine and fat; I could be one or the other, but not both. To be feminine, you need to be skinny and naturally hairless, need to caress a man’s arms the same way your cis woman friends caress their homophobic boyfriend’s shoulder when they need to get him to do something. I could also choose to be fat, but then I would have to be dominant, masculine, and a bear; either choice would only ever validate me through fetishization. So why in the hell did I choose both?

Last year was the first year that Pride included the topic of Fat Liberation. It was a surprise, but I was pleased nonetheless, because we need to address how our community, which is supposedly built on the acceptance of individuals, reproduces the beauty standards of non-queer folk, in a concentrated deadly dose that normalises eating disorders and unhealthy self-images. How can we preach acceptance when a body like mine is still stigmatized within our own ranks? And even then, is the fat body then just supposed to be left to rot, so the thin and masculine can assimilate into the structure of the oppressor? In the words of Audre Lorde, we can’t destroy the master’s house with the master’s tools, yet here we are, building his house in rainbow colors.

Living in the intersection between femininity and fatness requires a strong survival kit. Whenever I get home, before I even have time to unpack my grocery bags, I need to unpack the daily addition of trauma added to my existence, because, for some reason, it’s triggering for people to see a fat body embracing its femininity and living truthfully. It hurts people that I, as a fat body, don’t walk with shame, because how dare I like myself when they hate their thin bodies? We need to understand that the experience of Queerness differs with other factors present in the person walking the mile. So, what is inclusion, if we are not including every body walking the same mile down the rainbow road?

There is a paradox within acceptance, because should we, in the name of acceptance, accept every possible opinion? Should the opinion of people who say, “No fats, no femmes, no Blacks, no Asians” be accepted for acceptance’s sake? Again, how can we not address the problem that people who stand on the shoulders of freedom fighters reproduce the same structural oppression that was used to oppress them? Every time a gay man says, “no fats, no femmes,” he submits to the rules of the straight man, furthering his own oppression around and within himself. The fat body has been banished to a dimly lit basement, with leather harnesses, and the smell of musky armpits and leather polish. It has become a kink, a fetish, an oddity outside of the default porn categories, because god forbid mortal eyes see skin draped over fatty bones.

Like green hills over grass covered landscapes my body lies; like the rolling waves over rock formations the skin stretches over the being that captures all of the life that made the breath I drew when this word was written. Liberation of the body starts by accepting that it is yours. It is the same shell that protects the oyster from hungry predators, or the tortoise from the bite of the feral wolf. The skin envelops everything that is you, and your being begins and ends with the fibres of your surface. It grows, the same way your life does, expanding with every gust of air rushing through your lungs. It is concentric circles within your wood. It is wisdom in the shape of a lived life, taking on every adventurous wound, every caring scar, every story left untold by nothing but the skin, to repeat the same words until earth takes us back.

The most liberating moment for me was the moment I realized that a man’s value of me only reflected his character and not my flame. No man on Grindr could denounce the treasure that is me, because if he wants to be the pinnacle of patriarchal obsession, then be my guest, and internalize the hatred you project onto me. Be the harbinger of your own doom for all I care, but I refuse to let the ideals of our colonial ancestors continue in the water of my creation. After all, the blood of the covenant is thicker than the water of the womb, and my covenant is with the people who came before us. The people who ensured that we would not be made criminals for loving a person. Those who defined resistance in the name of freedom. My covenant is with them and everyone else who continues to fight the fight for liberation, instead of assimilation.

Now that I know why I chose being both feminine and fat, I also know it wasn’t about choice, but more about acceptance; about embracing the truth instead of hunting some unreachable goal. There is a choice to be made when we, as a minority, stand on the road to our life. Do we choose to go in the direction that is the norm, and try to best fit into that path, or do we choose the yellow brick road that leads to our own identity, unpacking the lessons we were taught on how to be a “correct” person along the way?

There is no inclusion, no freedom to gain, if we do not dismantle the structures which we create because we haven’t been taught any other way. Queerness used to be the opposite of the normal. Anyone who didn’t fit into social norms was queer, so by that definition, fat liberation is queer liberation. What freedom is to be gained, if liberation only includes those who pass into society’s other norms of whiteness, cisness, straight-acting masculinity and thinness, to name a few? Do we fight just so that we can assimilate, and become that of the man who used to oppress us? A wise person once said, “no pride for some of us, without liberation for all of us,” so why celebrate the liberation of those below the glass ceiling, when others can’t even reach the ladder that you stood on?