I wrote this story in February 2021 as a creative writing exercise. I had a lot of thoughts and feelings about my childhood after spending 2020 really getting to know myself and how long I spent masking off certain parts of my personality. For a long time, I felt like there were two of me; the person that I presented to the world was acceptable, organized, innocent and straight, and then there was the actual person I was. My spirit, I guess you could say. A girl who is intensely disorganized, does impulsive and stupid things and is in fact bisexual. For a long time, I couldn’t figure out how to take the mask off, because the mask felt like the real person, and the real person felt like something to hide. I shouldn’t share my insecurities because I should be the strong person in the family. The oldest and the smartest. I can support LGBTI+ rights, but god forbid I speak loudly about my own identity. Very recently, I got the diagnosis of ADHD, which made another layer of this masking make so much sense. All the times I was punished for being impulsive when I didn’t even know I was being impulsive. These are integral parts of me, I am not neurotypical nor straight, but I had to pretend to be to fit in. So, she was trapped inside me, and she was insecure about my body, she was convinced that I was fat and that every little thing about me was wrong because why not, if our insides were wrong surely our outside must be too. But last year, I decided to get to know her. Let her breathe and let her teach me who I am. I started dating, I started talking, I went to doctors, and I embraced the faults that we share. She is still insecure, but she is also me now, and I accept that everybody has insecurities. What is most important now is that I can live my truth.

I think this story can be seen in different ways though. To me it’s multi-layered, but we might not share the same layers.

It wasn’t a beautiful day that day. It was windy and the black skies loomed ominously on the horizon, like a panther ready to jump if we were to ever turn our backs. The surface rippled nervously as the coming storm blew upon it, casting strange shadows on her already grimacing face, and causing her expression to look even stranger than usual. She didn’t remember this morning. I stared at her, the hair standing up straight from the current, as if reaching for the unrest at the surface. She isn’t familiar to me today. This happens sometimes. I touched the inside of her right arm, where familiar fingers had used to linger in times of discomfort, but it brought neither me nor her any reassurance at his time. The placement felt awkward and the curve was all wrong. I only felt ice on both surfaces, the skin cold from the stir of the storm, and I let my hand drop back down, slow in the water like a leaf in the breeze. I saw her sigh, deep and heavy, and a bubble escaped from my lips. I do wish she could breathe more easily.

Unable to look her in the face, I looked at her hand as we walked out the door and asked her the question – “Where are you?” She didn’t answer me. “Are you breathing?” I asked, as I lay my hand gently on her chest, avoiding the curve of the collarbone that makes us both uncomfortable. The movement told me that the lungs were breathing, and another bubble escaped. Our words don’t travel well in this state, I know, but I always hope we will become better at communicating somehow. The flood is scary, and we both know how the waves feel when they come crashing in unexpectedly. Although there is a sort of calm in the numbness, I do worry what we might be missing on the outside while we’re here.

The road to the shore had always felt long, even on the days where I managed to let her breathe, but when you are walking under water even 10 minutes can feel like a voyage. On those days, where she feels so distant and I have to carry my legs alone, even stepping over the doorstep feels tedious. But there’s a person at the end – a goal that we both deeply wish to reach at some point during our lifetime. We’ve gone this way before when we don’t know what else to do. On the days where we can’t swim but manage to not be swept away by the current, we drag this body back to shore, step by step. We’re always alone – no one knows exactly how often we tread these waters. We don’t wish to speak on it or about it, because that would mean acknowledging the struggle that the mind faces, and that, I think, is a step that I cannot take alone. There will be a person on the shore one day waiting for us; someone who is less conflicted and not distorted by the shadows on the surface. The expectations and reality that splits us apart.

Usually, she spends a long time fighting me on these days. She ties her hair back so that it won’t distract her and gets angry when I say that it makes me insecure about the size of my ears. When bubbles leave her mouth like smoke from a cigarette, I assume that she’s yelling at me, and I just close my eyes. We don’t like looking at each other because it shouldn’t feel this way. But I did look at her on that day. I had awoken to clear skies and warm weather, my mind dry and my hands numb. It was one of those rare mornings where I could make myself believe that my body was in fact mine, and that I was in fact in charge. I could believe that she wasn’t here, and that no one would be able to tell that I was different. I avoided the mirror, turned the other cheek when I caught a glimpse of her in the black part of the oven, and managed to get dressed without thinking. The whole morning had been a success, until I noticed the black skies creeping up on me when a coworker put their hand on my arm. A light touch, a look of approval that did not feel comforting in the slightest. I was desperate to stay present, I wanted so badly to just be here, but as I opened the next door to make my escape, she stared back at me from the other side. “You look like you’ve lost weight,” she told me. “If you had a boyfriend, he should be happy… and your hair, it suits you”. She knows who I am because I am the mask that she wears. She looked like she was smoking 100 cigarettes, but I couldn’t hear any of it because my vision was fading. And then she passed out.

My name is Emilie Fiirgaard, I am 24 years old and am currently studying a Masters in Creative Writing and Publishing at Bournemouth University. I grew up in a small town called Holstebro, a city that promotes culture and art. I have been involved in musicals and other creative lineups as a child but found that my passion may be more in the characters on paper than the presentation on stage.

I love writing stories that deal with concepts and ideas more so than specific people. This includes both abstract concepts, emotions, and rhythms of language. I’m the type of person who thinks a lot about a lot of things, and sometimes I don’t always have the opportunity to think all the way through all my thoughts. Therefore, I like to follow some of them to see exactly where they lead. 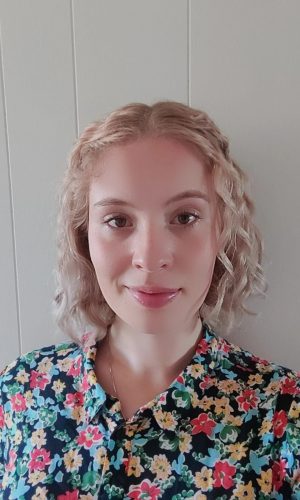