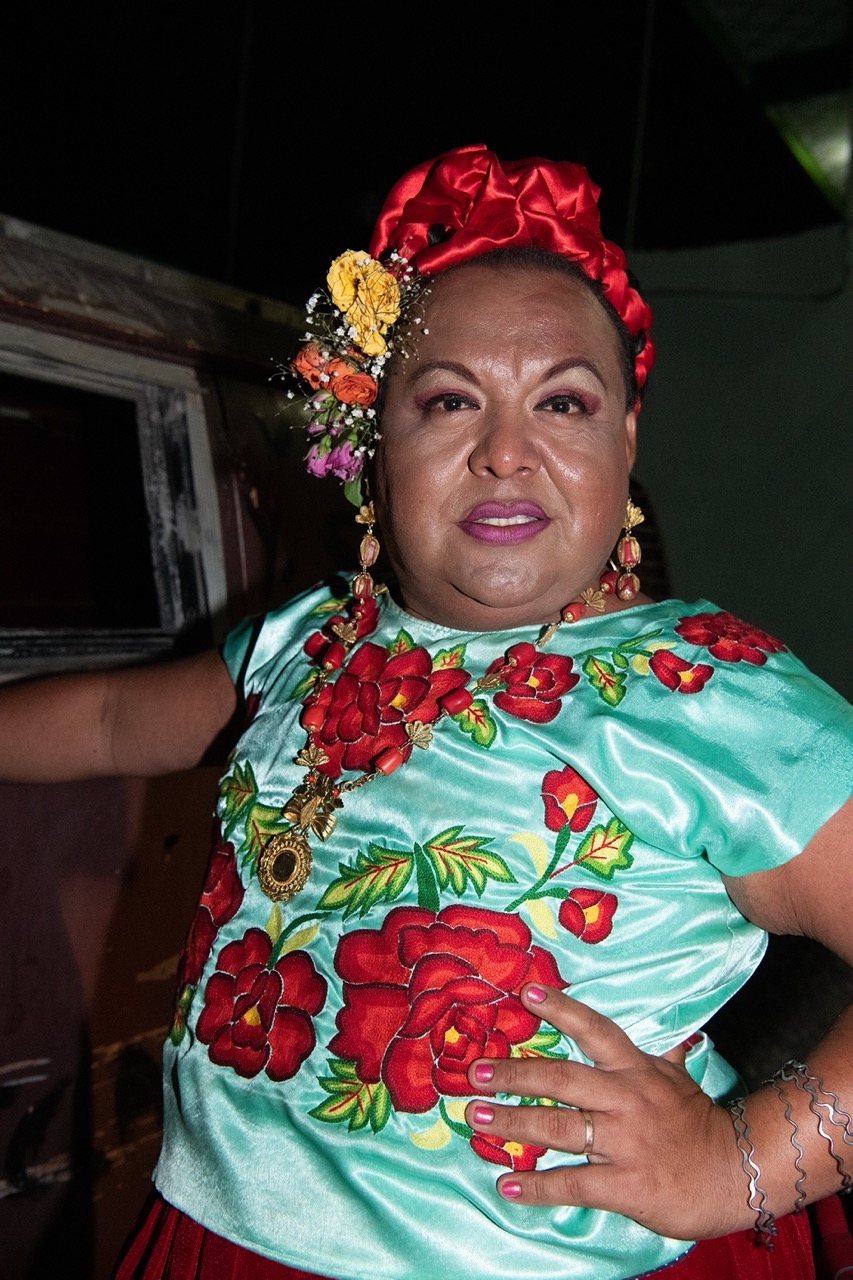 Photos and text by Shazia Khan

”We are all human beings. We are all equal. There is space for all of us. I’ve done everything which was requested of me, I was captain, I was queen, I was the leader for my gender in my society because, in my heart, I am a Muxe. I am grateful for all those people who have come near and far to celebrate this day.”

– Mística, resignation speech by the end of her year as ”mayor” for the Muxes in 2021.

In Southern Mexico, in the federal state of Oaxaca, there is an isthmus between the Pacific Ocean and the Caribbean called el Istmo de Tehuantepec. In this area, several of the Indigenous Zapotec people reside, who have maintained their language and culture from before the Spaniards arrived. Here, the social and local tradition includes a third gender called Muxe (pronounced ‘mushe’). The word derives from the Spanish ‘mujer’ (woman), but this tradition is pre-colonial. They are often dressed in traditionally female attire and hold a special status. They are an important part of society and run their own businesses. They are often successful and well-liked in the local community.

Each year by the end of November, in the city of Juchitan which is the center for the Zapotec culture, a Muxe organization arranges a great party, a Vela. The members of the organization are colloquially known as “Las intrepidas”, the fearless. The festivities begin with a Catholic mass in honor of the Muxes because the church recognizes their significance and role in society, as well.

Photographer Shazia Khan has spent a long time in Juchitan and has followed the Muxes at the colorful parties – as well as in their private residences. Who are they, how do they see themselves, and how do they see their existence? This is an excerpt from these interviews. 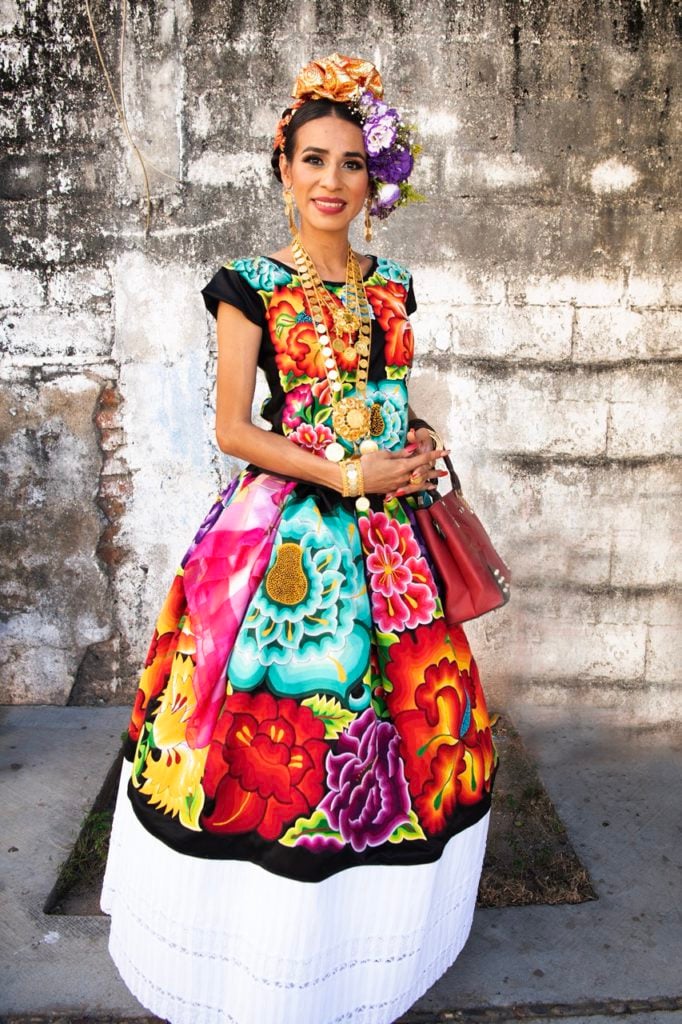 “Many people believe it is a blessing for a mother to have a child in the family, who is Muxe. Us Muxes are extremely attached to our parents and we take care of them when they’re old.”

Naomy is a lawyer and a prominent activist in the Muxe society. She represents the younger generation of Muxes. She is highly active on social media and volunteers for an organization that helps poor, landless people achieve land and rights in society. In 2024, she will beappointed as queen of the Muxes in Juchitan and she’s already preparing. She spends time attending the so-called Vela parties both locally and in other parts of Mexico. The Velas are traditional parties that are important gathering points for the Muxe culture.

“Many people believe it is a blessing for a mother to have a child in the family who is Muxewho will help her at home. Us Muxes are extremely attached to our parents and we take care of them when they’re old. Traditionally, Muxes don’t marry and leave home. They take care of their parents and grandparents.

Contrary to Spanish, which is grammatically based on two genders, the Zapotec language is completely gender-neutral. This means that the Zapotec culture doesn’t connect people, objects, or actions to the concept of male or female. Therefore, it is difficult to translate the Muxe-identity to other languages where a stronger connection to gender exists, even in the construction of a simple sentence.

The Muxe culture in Mexico is, as well as other Indigenous societies around the world, a notable example of genderfluidity and has been for generations. While the Western world differentiates between men and women, transgender, gay, bisexual, etc. the Muxes believe it is the lack of distinction which makes them genuine and precious. The definition of Muxe is simple and includes everyone.” 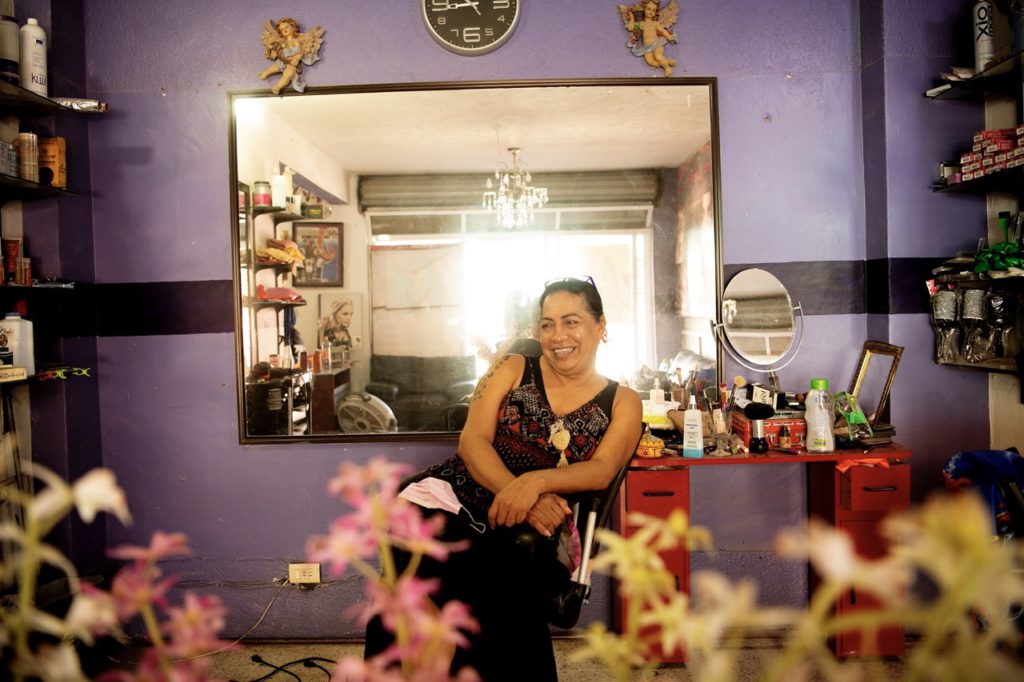 Felina is 54 years old and has been a leading activist for the Muxes for 30 years. She has represented the Muxe culture internationally at TED talks and she’s the spokesperson for the organization locally.

“46 years ago, Muxes gathered here in this town to talk and support each other. Since then, our struggle for our identity and rights has been known in all of Mexico and internationally. I was born between the older and the younger generations in the movement, thus I am 2. generation. The Muxes have always existed with the Zapotec in Juchitan, throughout our history. Attire and appearance were of course different back then, times were different.

A woman once said to me: In the old days, the Muxes were very innocent and well-mannered, they did not dress in women’s clothes. I responded: The women didn’t get drunk back then! Now, the women party and drink more than the men! So, times have changed as we Muxes have. Back then, we didn’t have the internet and TV, you couldn’t keep up with other things. So, we have adopted a few modern customs – but without forgetting our roots, our traditions, and a part of our culture.

Being a Muxe, to me, is a duality. It is something between the two genders, masculine and feminine. They merge and out of this grows a Muxe identity. Even though I, being a Muxe, highly appreciate femininity, I don’t see myself as female. As a Muxe, I can have the sensitivity as a woman and, at best, the strength of a man. I am a person who can feel at home in both positions. I can understand both men and women. But I cannot speak 100 % from a woman’s point of view.

We are proud of our customs, language, and culture. We live our own culture regardless that our daily lives are characterized by the Western lifestyle as well. We maintain our attire for special occasions. As Muxes, we learn a lot from the women. The women here are very diligent and support themselves and their families. From them, we learn how to work and manage ourselves.

I am Muxe and I have my place in society, as the women and men have theirs, we must respect that. In our society, we are recognized as Muxes. Socially we have recognition, and we appreciate each other – regardless of clothes and appearance. We don’t have many problems with exclusion in our community. When you are Muxe, you embrace everything. No further division is needed, LGBT, gay, trans, etc.

In this world, we live to be happy and joyous. Life is short and you should enjoy it. You must act out whatever your heart holds. Everyone – regardless of gender – faces both good and bad stuff here in life.

The Muxes are friends with both women and men and when we throw our great parties (Vela), everyone is welcome. This is inclusion. We are a part of everything.” 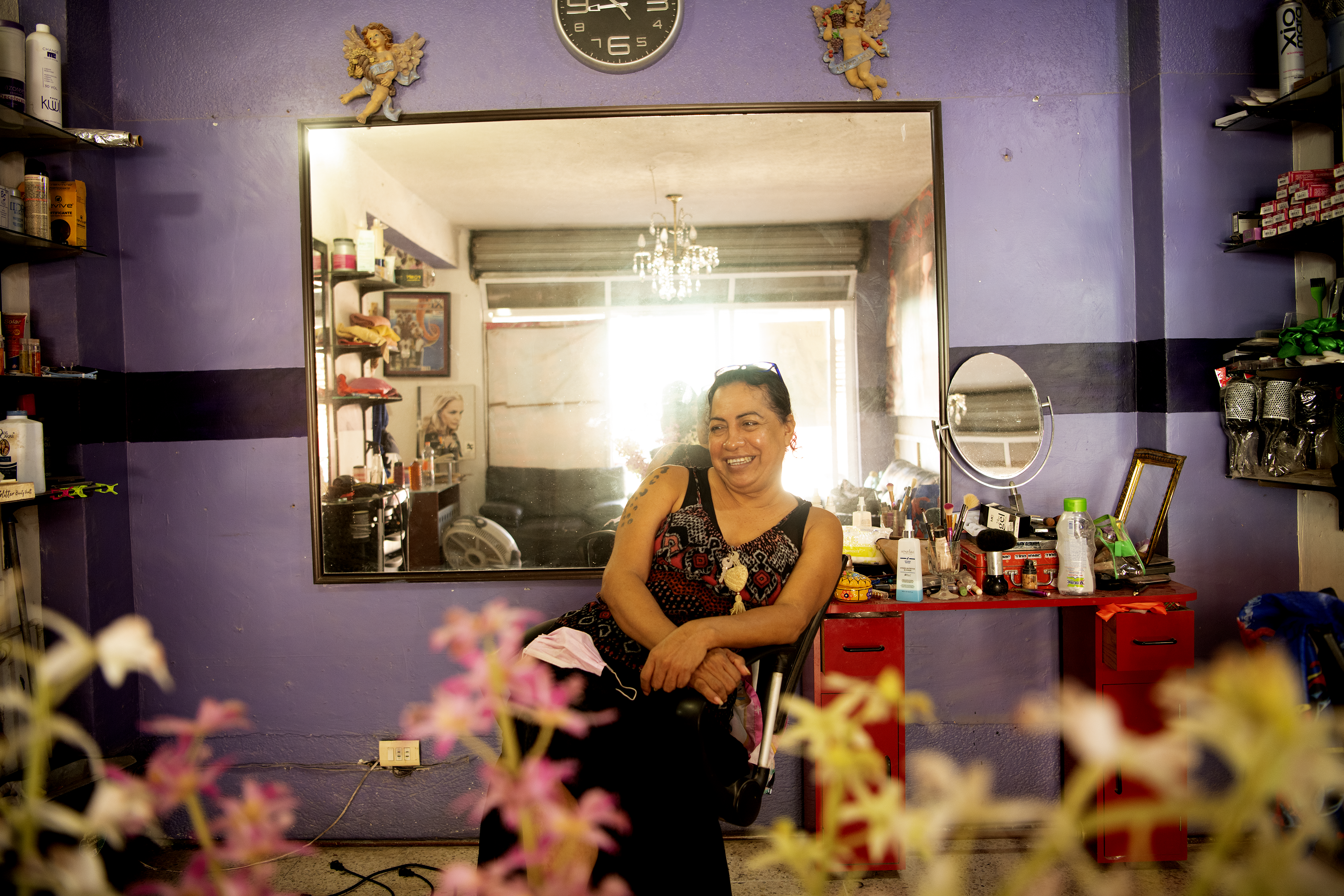 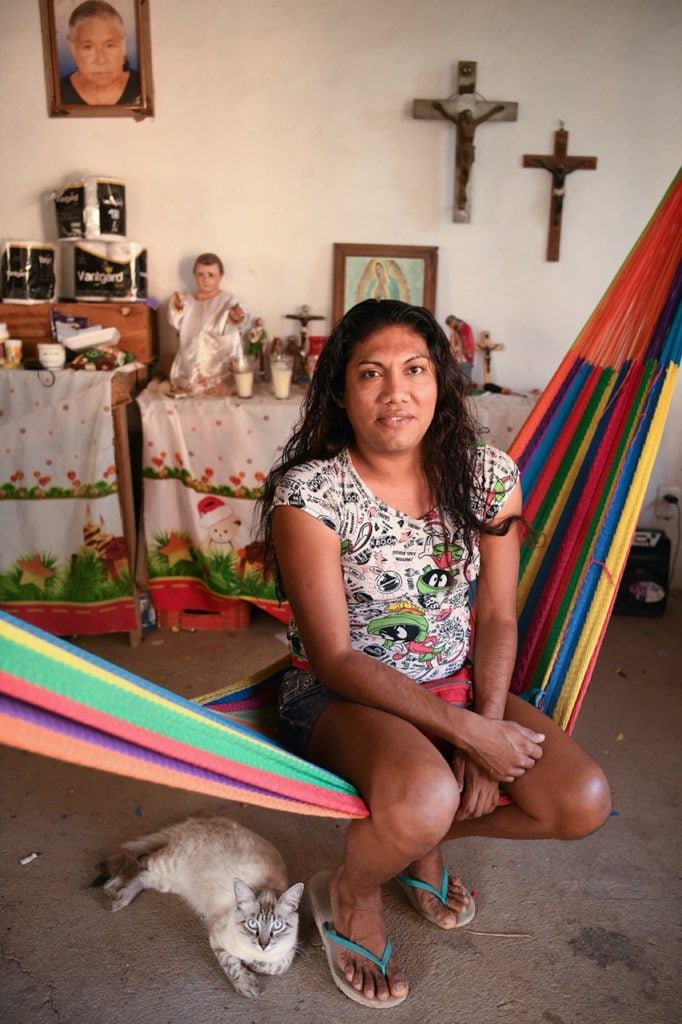 I was 13 years old when I found out I was Muxe. I decided to do as I pleased regardless of what other people thought of me.

Vera is 31 years old and she’s an activist and works as a decorator. In the photo, she’s sitting at home in front of her altar. On the wall behind her, there’s a photo of her grandmother. Many of the Muxes are catholic. Their faith and the way they practise it is, however, heavily influenced by their indigenous culture.

“I left school at 15 and started working. I wanted to learn handicrafts and be independent and manage myself. I work for an organization called Mexfam, doing a project called ‘Arcos’. We inform young Muxes of their rights and about contraception. My mother lives in this house with me. She still works.

As a Muxe, I feel free. I am neither man nor woman. I am Muxe!

When you go to a party as Muxe, you must look your best! You must be kind and smile at everybody. It is nice to be somewhere, where you’re the center of attention. People get up and smile right back at you. Sometimes, people on the street yell at me and say mean things. I ignore them.”

Read more about Shazia Khan’s work and her other projects at www.shaz.dk.

The photo exhibition Muxe – Mexico’s third gender will open at KU.BE on Friday 12 August at 16.00, where there will be a reception. The exhibition will be at KU.BE until end-September 2022.