For the second year running, the advocacy group ILGA-Europe has ranked Poland as the least LGBTI+ friendly country in the European Union. Incumbent president Andrzej Duda pledged in the run-up to his 2020 re-election to “defend children from LGBTI+ ideology.” The declaration of “LGBTI+ ideology-free zones”, encompassing around one-third of the country, received widespread condemnation from across Europe between 2019 and 2020.

Often the anti-LGBTI+ sentiment is cloaked in Catholic piety. Such a cloak lends it much legitimacy — the reach of the Catholic Church is wide, forming not only the foundation of the nation’s spiritual identity, but its national identity too. It is a position borne of opposition, as the Church’s resistance to the communist regime meant that independence in 1989 also became a triumph for the Church, propelling it to high levels of political power and influence.

And, once again, the Church finds itself in the opposition. The Archbishop of Kraków, Marek Jędraszewski, warned in 2019 that although the country may have overcome the “red plague”, it must remain vigilant against a new menace: the “rainbow plague”.

In such a climate, LGBTI+ and Christian identities might seem irreconcilable. However, to a small but increasing number of LGBTI+ Christians in Poland, this need not be the case. To find out more about what it means to be LGBTI+ and Christian in Poland, I spoke to Szymon Niemiec, an independent Catholic bishop who founded Warsaw’s Equality Parade, as well as the co-founder of Fundacja Wiara i Tęcza (“Faith and Rainbow Foundation”) Artur Kapturkiewicz, and Misza Czerniak, a Wiara i Tęcza activist and board member of the European Forum of LGBTI+ Christian Groups.

“We are people who think that it is not a problem to be LGBTI+. And as Christians, we believe that the church is making a big mistake in teaching that this is wrong,” explains Kapturkiewicz. He co-founded Wiara i Tęcza in 2010. The ecumenical organization offers support to LGBTI+ Christians, and now has local groups in six parts of the country. It provides retreats, local meetings, and online support.

While LGBTI+ Christians experience their faith in diverse ways, to those I spoke to, the central teaching of the Bible is one of love. Niemiec notes that while other teachings have been subjected to the subtleties of interpretation and translation over time, the message of love is constant; one should love not only God, but also each other, regardless of differences. The activists note that the mainstream Church leans towards interpretations that are politically expedient, and so, in response, they draw a distinction between the Church as the institution, and the church as a community. It is the latter that counts.

As Czerniak puts it, “What I believe is that we are the church. It’s up to us to decide whether we fit in or not. It’s a matter of our conscience, because our conscience is the primary way that we discern God’s will in our lives. And our conscience says that we are not doing anything wrong. We’re not hurting anyone. We’re practising love.”

Community is important too. The activists stressed the importance of seeking out an inclusive community – “a pocket of air in which to breathe freely,” to use Czerniak’s words.

And if such communities do not already exist? Niemiec’s message is simple; “Create them.”

Here he refers to the verse of Matthew 18:20, in which Jesus states that “where two or three are gathered together in my name, there I am in the midst of them.” Niemiec is confident that like-minded believers are out there, either in person or online. He notes that change always begins this way. It starts with the small groups, on the outskirts, whether it is the original twelve disciples, or the LGBTI+ friendly Christian communities forming in response to alienation from the mainstream Church.

So is the case with Wiara i Tęcza. “We are a rather small group,” explains Kapturkiewicz. “At our activities, there are maybe about fifteen or twenty people. But our website, our Facebook page, and our statements, are known to a much wider community.”

Predictably, reactions from this wider community towards this LGBTI+ friendly brand of Christianity are mixed. Kapturkiewicz points out that while the left-wing press is generally sympathetic, Polish state media is less so. Accusations of blasphemy are rife towards those who try to reconcile the LGBTI+ and Christian identities. In 2019, Niemiec faced charges for “offending religious feeling” — a criminal offence in Poland punishable by up to two years imprisonment — after leading an LGBTI+-friendly ecumenical service in connection to the Equality Parade.

What I believe is that we are the church. It’s up to us to decide whether we fit in or not. 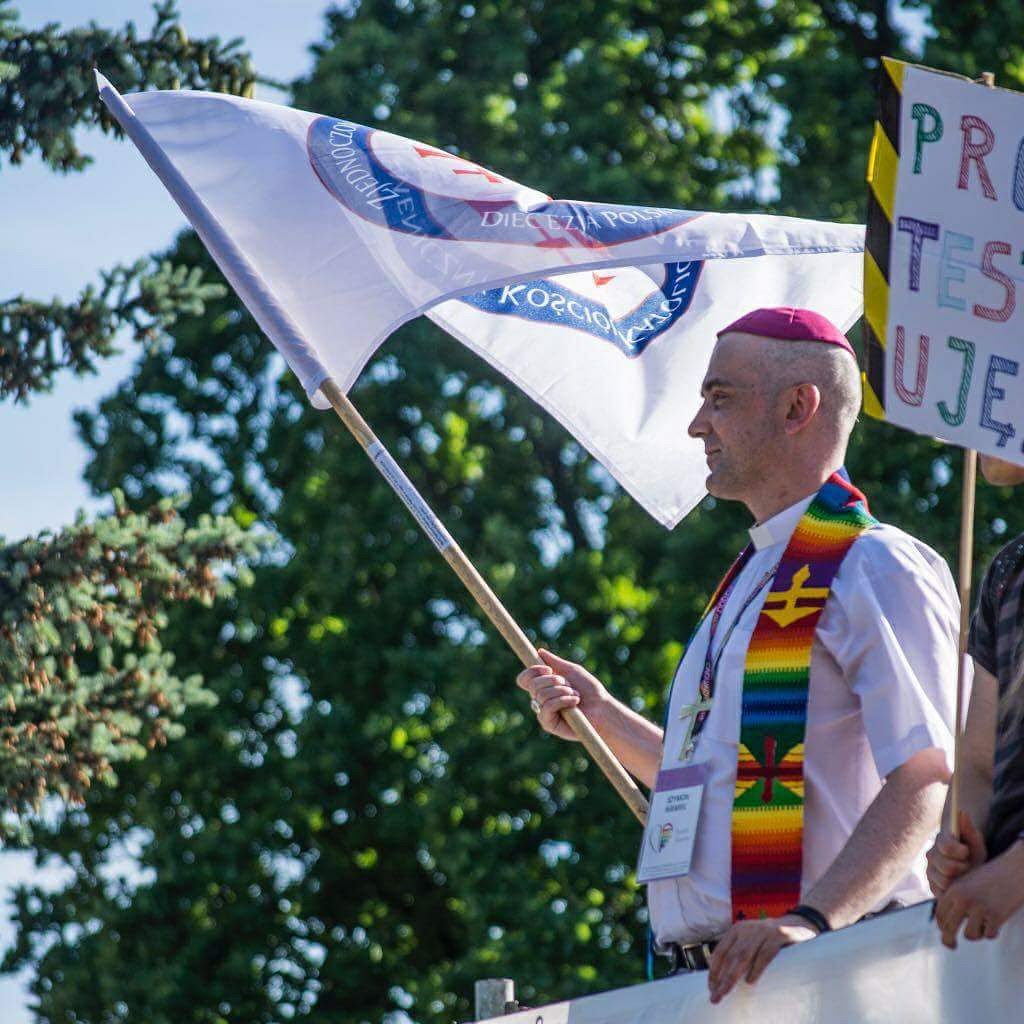 Nie trwóżcie się! W domu Ojca mego jest mieszkań wiele – Do not be afraid! In my Father’s house there are many rooms. 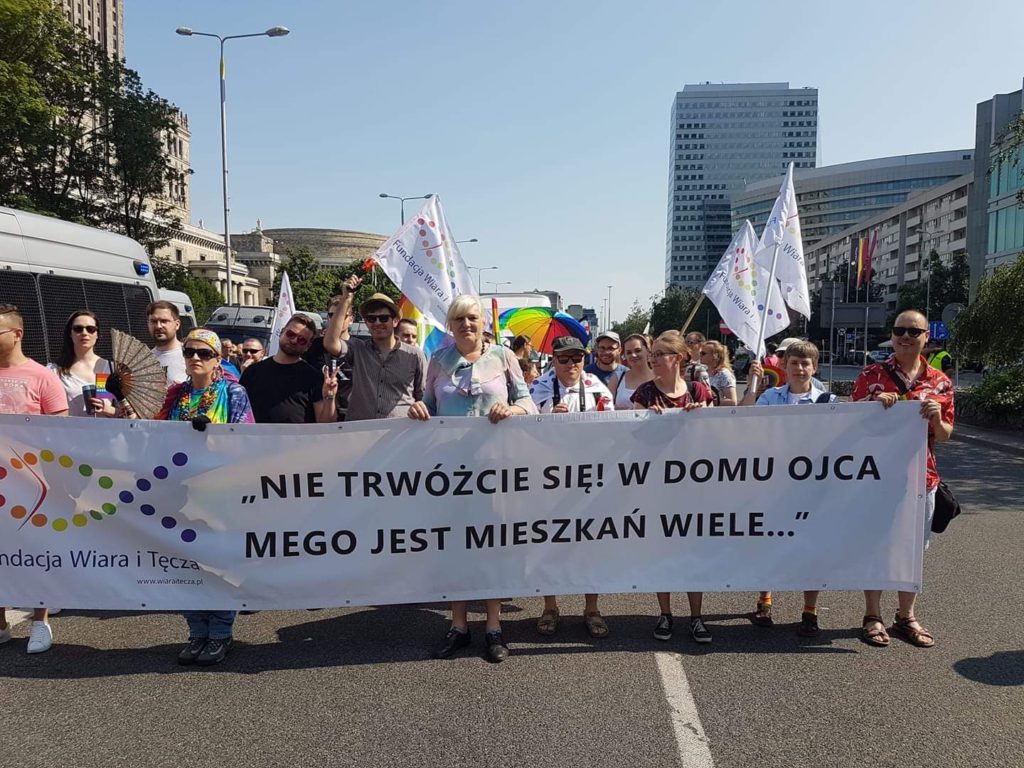 But Polish society is changing.

On the whole, religious sentiment is declining. Of all the countries surveyed in a 2018 Pew Research Center survey, Poland showed by far the largest generational divide in terms of church attendance. While 55% of those over 40 attend services weekly, this fell to just 26% amongst adults under 40. 40% of those over 40 claimed that religion is very important to them, compared to just 16% of those under 40 – the largest age gap amongst European countries.

The activists suggest that part of the reason for this rapid decline in faith among young people is the stance the Polish Catholic Church has taken towards LGBTI+ people. A 2020 Pew Research Center survey supports this hypothesis – just 33% of those over 50 believe that homosexuality should be accepted by society, compared to 60% of adults under 29.

“It is obvious that young people are not able to attend a church which says such bad things about the LGBTI+ rights,” Kapturkiewicz states. He imagines a future in which the Church is divided in two – a shrinking conservative Church aligned with the political right-wing, and an increasingly inclusive majority.

Czerniak agrees that the Church’s position, as it currently stands, is untenable. “There is no sound theology behind LGBTI+ phobia,” he notes. “They have to be more welcoming to LGBTI+ people, or they will die out.”

While there is still a long way to go, there is cause for optimism for the activists yet. Their message of a Christian faith that centers on love and inclusion seems to be increasingly resonating with the broader population, bringing hope to those who find themselves at the intersection of these two identities. When Wiara i Tęcza takes part in the Equality Parades, their banner features an excerpt from the Bible verse John 14:2, in which Jesus seeks to reassure his concerned followers:

“Nie trwóżcie się! W domu Ojca mego jest mieszkań wiele” – “Do not be afraid! In my Father’s house there are many rooms.”

Czerniak describes some of the reactions the banner has elicited from onlookers. On one occasion, it brought a passer-by to tears: “She read the text, and she came to hug each of us. She told us that she was thrown out of her home by religious parents, even though she was a believer herself. She had thought that she had to forget that part of her life and her identity.”

The end of the verse, unwritten, but without a doubt invoked in the minds of the faithful who read it, serves to affirm their message of an inclusive Christianity – a Christianity in which LGBTI+ identities do not contradict faith, but complement it. In it, Jesus states:

“Idę przecież przygotować wam miejsce.” – “I am going to prepare a place for you.”