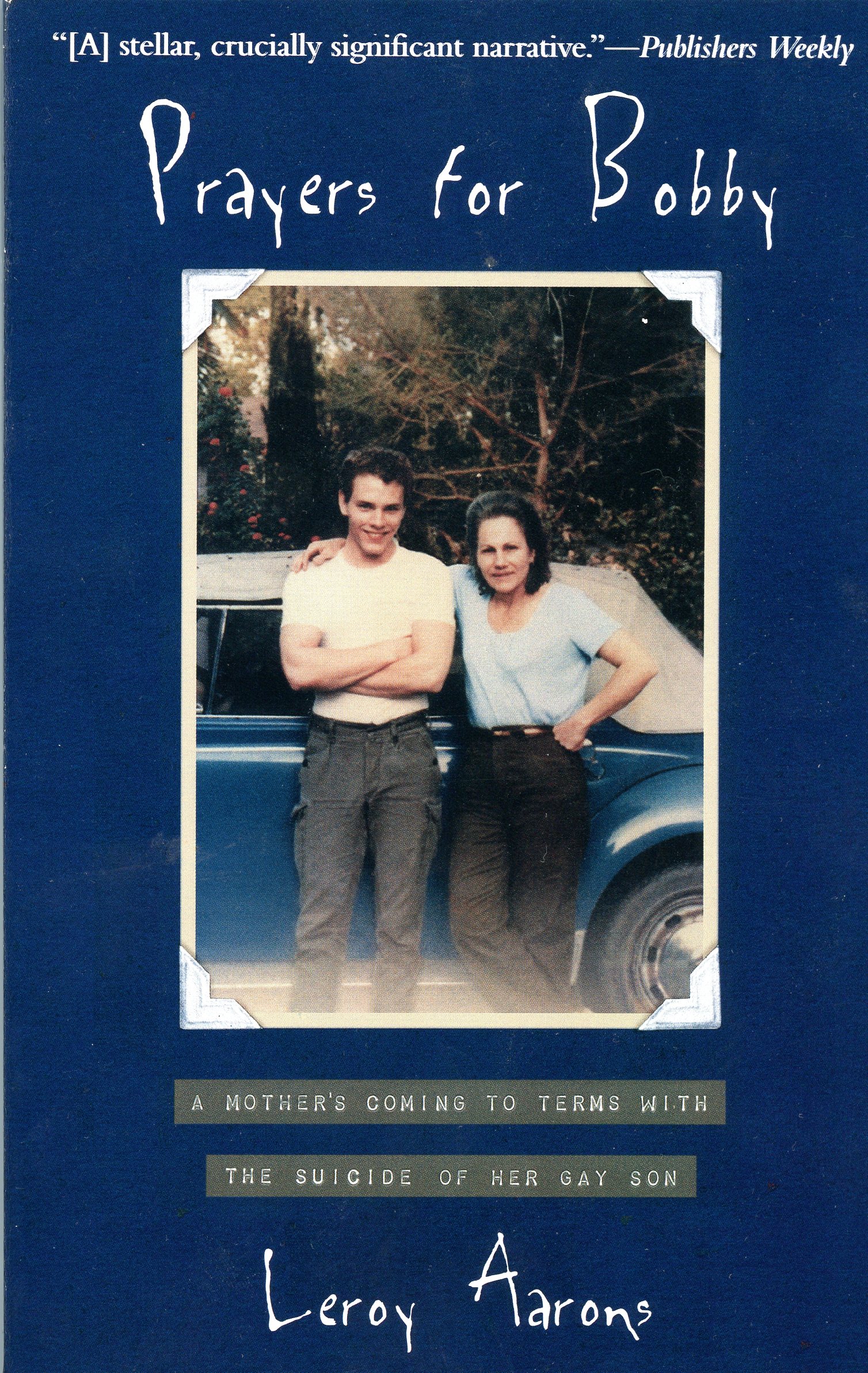 In many countries, religious beliefs hinder the expression of our children’s true identity. It is unfortunate, but not unusual, to hear about family members rejected or pushed away for their orientation in the name of faith. When I was 18 years old, I came across the story of Mary and Bobby Griffith. I learned about the agony of a young gay man in a household where the creed in God and the Bible were a constant presence. The story of this family, although filled with sorrow, remains an inspiration, teaching how to divide faith from conscience. I hope it pushes all devoted parents towards comprehension and acceptance of their children.

During the 60s, Robert – aka Bobby – was living surrounded by love. A warm family with lots of children that felt sheltered by affectionate parents – Mary and Bob.

But the unity of this family was shaken after Bobby came out as gay when he reached puberty. The sense of deep love became questioned by everyone, who couldn’t fathom his “choice”. Although it was never a choice but his identity, Mary had a challenging time listening to his suffering. Although she deeply loved him, her religion always taught her that homosexuality would bring him away from the family in the afterlife. And that was all that mattered to her.

Understanding Mary’s past, her unkindness was due to the fears her mother implanted in her. Sinning meant going to hell, meaning Bobby’s “sin” was going to strip him away from her. That’s why she kept on pushing him towards rejecting his true self, with the hope that with prayers and repentance, God could change him and save his soul.

Mary wasn’t a severe mother but rather a desperate woman, raised with rigid Christian values. For a large part of her life, she felt that God was always judging her and her family’s actions, making her question her competence as a mother and wife. After having a miscarriage when she was younger and not yet married, she genuinely believed that God punished her and her future husband for having premarital sex. That hard lesson taught her that following the rules could keep her family safe. Trusting the Church and the Bible – which she considered God’s messenger and message – helped her find some stability in her life. She learned not to use her own judgment but to follow the scriptures, making it her and her family’s mantra.

At the time of Bobby’s coming out, Mary’s insecurities reemerged. Like many other religious parents, she had to reevaluate the doctrines that her family, community, and church instilled in every aspect of her life. Crippled with self-doubt, Mary was asked to make a conscious decision and reject what gave her life some stability. She was immensely frightened about it, but her son was living the same situation. Bobby was Mary’s most devoted offspring, carefully following his mom’s – hence the Bible’s – preachings. Therefore, Bobby struggled during his whole life. He was furious at God for setting him up for failure, for not being what his family and religion wanted him to be.

Bobby’s inner conflicts never stopped, and, with every attempt at self-acceptance, his mother severely rejected his thoughts, banning them as just the Devil’s work. Mary refused to comprehend her son, creating a toxic environment that constantly repressed Bobby’s identity. This situation led Mary to one of her greatest sorrows: losing her son.

On August 27th, 1983, Bobby jumped from a bridge above the highway, and a truck instantly took his life away. He felt that he could never please God or his mother, both equally important to him. Bobby decided that ending his life was the only way to stop his depression.

Although Bobby couldn’t help Mary to change while alive, his death provoked something in her. It was not a sudden change but a five-year journey that led her to a quest for queer people’s equality and acceptance.

“I believed I was doing right in the name of Christ. I did not know my soul; my conscience was in bondage to the people and ministers who stand in God’s stead. I went along in blind allegiance, unwittingly persecuting, oppressing gay and lesbian people – my own son. The scales of ignorance and fear that kept my soul in darkness have [now] fallen from the eyes of my soul, my conscience. I have been set free to have faith in, trust the dictates of my conscience.”

After Bobby’s death, Mary juggled between moments of complete numbness and total hysteria. She believed that Bobby killed himself out of guilt for being gay, and, to some extent, she was right. Later, reading her son’s diaries, Mary discovered another side of Bobby. His pages and poems were dripping with self-hatred. He constantly expressed for years all his unhappiness as a constant and intense disgust towards his gay nature. He also revealed his terror of judgment from Christ, the same fright Mary felt throughout her life. Reading his words, Mary felt connected to her son and, at the same time, as broken and divided as he had been.

In search of the truth, Mary began questioning the Bible. It took her time to discern God’s loving nature from the vindictive one often displayed in that book. Four years after Bobby’s death, liberated from her ignorance and fear, Mary was preaching for everyone who rigidly follows the dictates of the scriptures to change their minds.

“When God views a loving and caring heart he is pleased and all is well with him. He is not concerned with our sexuality, but with the vast numbers of humanity who are not loved and cared for […]. There are those who will claim that I have been listening to Satan, that I have become a heretic. I would rather be branded a heretic while helping a child of God out of the gutters of this world, where the church and I have thrown them than to pass by on the other side muttering under our breath, ‘The wages of sin is death.’”

Mary indicates the pure role of God and makes parents reflect that her conclusion is based on human decency, not diabolical thinking.

With time Mary realized that her son’s suicide was the direct consequence of her rejection. Her hard stance on him had shattered his son’s soul. She also learned that her inability to neither fear nor understand what being gay means divided them forever. Although she spent years regretting her actions, she learned to forgive herself and channel her devotion towards a better cause.

Mary Griffith became an exceptional supporter of the LGBTI+ community. She fought until she was 85 to help young kids and families believing in God to see it as a source of unconditional love. Mary died in 2020 after an intense crusade with the PFLAG (Parents, Families and Friends of Lesbians and Gays) movement to condemn conversion therapy. She shared her personal story in the acclaimed book by Leroy Aarons and the award-winning film Prayers for Bobby, which keep on changing lives and preserve her memory.

“Because of my own lack of knowledge, I became dependent upon people in the clergy.  When the clergy condemns a homosexual person to hell and eternal damnation, we, the congregation, echo ‘Amen’.  I deeply regret my lack of knowledge concerning gay and lesbian people.  Had I allowed myself to investigate what I now see as Bible bigotry and diabolical dehumanizing slander against our fellow human beings, I would not be looking back with regret for having relinquished my ability to think and reason with other people […] There are children like Bobby sitting in our congregations. Unknown to you, they will be listening to your ‘Amen’s as they silently cry out to God in their hearts.  Their cries will go unnoticed for they cannot be heard above your ‘Amen’s.  Your fear and ignorance of the word gay will soon silence their cries.  Before you echo ‘Amen’ in your home and place of worship, think and remember. A child is listening.”

To all the parents out there, I kindly ask you to dig deeper into your creed, question what you have been taught, and reflect on Mary’s story, learnings, and fights. See the movie, read the book. And if your children come out, love them for who they are. You can still be devoutly religious and a proud parent of an LGBTI+ member.

All Mary Griffith’s quotes are extrapolated from the book “Prayers for Bobby: A Mother’s Coming to Terms with the Suicide of Her Gay Son” by Leroy Aarons. HarperCollins Publishers, 1995.