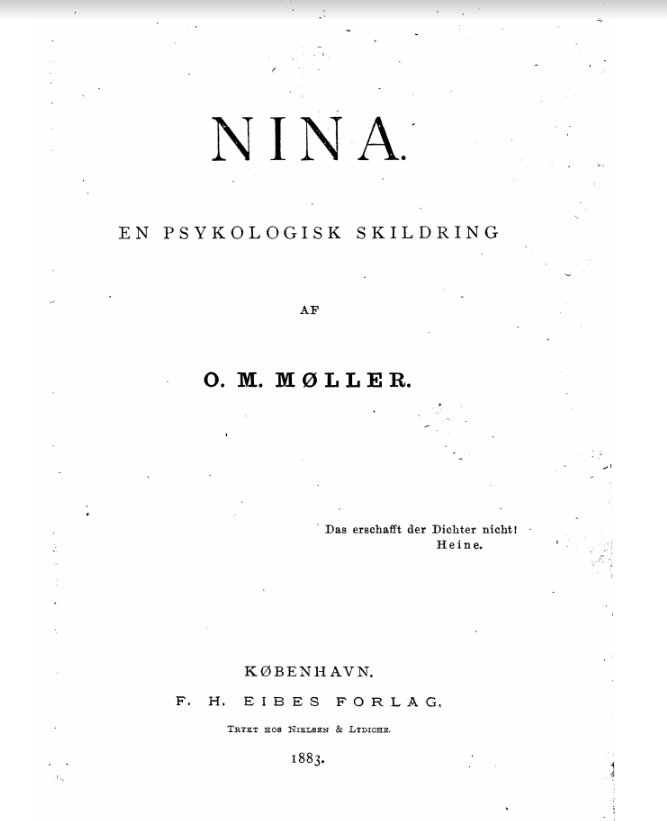 Historically, men have always taken up the most space. This is also true of modern LGBTI+ history. When the medical classification of homosexuality was invented by doctors, attorneys and humanists approximately 150 years ago, the focus was, first and foremost, on men loving men. And to this day, male homosexuality has been more present than female homosexuality.

In addition, legislation has almost exclusively been occupied with men. Lesbianism was generally regarded as an impossibility in the 1800s, because as the English Queen Victoria declared, women had no sexuality. Thus, there was no offence to legislate on or prosecute.

The world’s first modern homosexuality diagnosis was nonetheless given to a woman. The prominent German psychiatrist Carl Friedrich Otto Westphal (1833-1890) received a female-loving woman at the famous Charité hospital in Berlin in 1864. In 1869, he wrote the world’s first article about homosexuality, or “die konträre Sexualemfindung” (“the opposing sexual feeling”), as he called it. When the French philosopher Michel Foucault (1926-1984) wrote the ground-breaking “The History of Sexuality” in 1976, he proclaimed Westphal’s article as nothing short of the birth certificate of modern homosexuality.

This is a thought-provoking parallel to the entry of homosexuality in Nordic literature. Here, descriptions of love between men are much more present than those of lesbian love. The first explicit description of a homosexual person in Danish literature is, however, a woman. Her name is Nina, and her name is the title of a surprisingly early, now completely forgotten debut novel by the likewise forgotten writer Otto Martin Müller (1860-1898). In his time, he was a respected and well-read author, but his untimely death at 38 years has most likely contributed to the fact that he was never written into the history of literature. Instead, he might end up being a figure in Danish LGBTI+ history.

Nina is remarkable, as it was not until 1900-1910, that homosexuality really was thematized in Danish literature. The “Great Vice” affair of 1906-7 was an important factor. The story began with a banal arrest of two young men in a back yard in Copenhagen. They were under suspicion of theft, however, it turned out they were committing “fornication” as it was called at the time. A zealous police investigator used the arrest as an excuse to unravel a homosexual network, which, among other things, involved male prostitutes, and the affair was covered by the yellow press, which lavished in the juicy disclosures of homosexuals. One of the victims was famous author Herman Bang (1857-1912), who had to escape to Berlin, where he stayed for two years.

Naturally, Herman Bang’s homosexuality had been a public secret for decades and as far back as his literary debut in 1880 with the novel “Hopeless Generations” (“Håbløse Slægter”), rumours had been surfacing concerning his “queerness”. And the novel, which was confiscated and deemed immoral, does contain loads of queer and destructive sexuality, among other things, odd brood-eating female monsters, as well as the two effeminate and decadent main characters, William Høeg and Bernhard Hoff, who are everything but healthy, heterosexual men. Queer-theoretical reading strategies are required to read them – and the older female boy-eaters – as allegories for homosexual men.

Nina is something else. Even though her lesbianism is the novel’s greatest suspense motif, the “secret” which is revealed at the end as the solution to all the mysteries concerning her deviant and interesting character, the theme is completely explicit. Müller writes into a modern, scientific, continental-European tradition, which is evident in the novel’s subtitle: “A psychological Depiction” (“En psykologisk Skildring”). The author, who was only 23 years old at the time, was internationally oriented, spoke several languages and later passed the translator exam in Portuguese. Undoubtedly, he was a cosmopolitan and, in many ways, ahead of his time.

The international view can somewhat explain why Müller chose a lesbian main character for his debut novel. Furthermore, one can wonder whether the novel has an autobiographical motif as well. Has Otto Martin Müller himself been “burned” by a young, lesbian woman? The other main character, whose point of view we see throughout the text, is indeed a German academic, who shares his first name with his author. Contrary to him, the character Otto Jünger has already had his literary debut with a fictitious novel entitled” Schattenbilder”. The writer moves from Berlin to the romantic Heidelberg, where he accedes to a research position with a famous astronomy professor and he becomes a regular guest in his family home.

The novel opens with Otto’s arrival by boat to the Southern German city in rainy weather. The first person he meets, as he finds himself lost in the otherwise empty city, is androgynous being in a raincoat, who turns out to be female. She is “everything but beautiful” but, nevertheless, she is luring in a scientific, rather than a romantic way: “She would have captivated a psychologist more so than a beau at the ball”. The woman is later revealed as Nina, the daughter of Otto’s boss.

In time, Nina and Otto form a friendship, as they share a love for art. Nina is a painter, but Otto convinces her to become a writer, and with this being his field, he can teach her. They fall in love and end up engaged. Rather than physical attraction, common work seems to be the foundation for the marriage: “Now, they could work together in the name of their love, fully and sincerely, it would last a lifetime”.

However, Nina has a fatal secret: she is in love with a female friend, who is married, and she does not have the power to suppress this feeling, regardless of her affection for Otto. In a dramatic showdown scene, she discloses her love and its consequences. She cannot handle chastity in relation to women: “If I cannot have what I want from the one I care about; I have to get it somewhere else”. She has seduced young women, yes, “contaminated” many people: “Many young women have cried, and still cry for my sake; their blame still rings in my ear, – many sleepless nights I have had for their sake. I have cared for them, – have kissed them and, to some extent, shown them a world, unknown to them, and then – I have forgotten them”.

By uttering these words, Nina signs her own death sentence. The progressive narratives of the past can contain homosexuality, as long as it’s sublimized, repressed or – maybe – strictly monogamous. But “preaching” homosexuals must be eliminated. And Müller does so: Nina has weak lungs, has suffered two pneumonias and a third will cost end her life. And during her terrible confession, it does just that: “She had caught a cold, her chest was under attack from the cold wind, but she kept her neck exposed”. Thus, even the progressive and farsighted portrait by Otto Martin Müller enters the modern tradition, where a good homosexual is a dead homosexual.

Lector in Danish literature at Cultural Sciences, University of Southern Denmark. Author of “The Empty Human. An Introduction to Michel Foucault” (“Det tomme menneske. Introduktion til Michel Foucault”) as well as monographs on Karen Blixen, Herman Bang and H.C. Andersen. He is currently occupied with the Danish homosexual literary history.