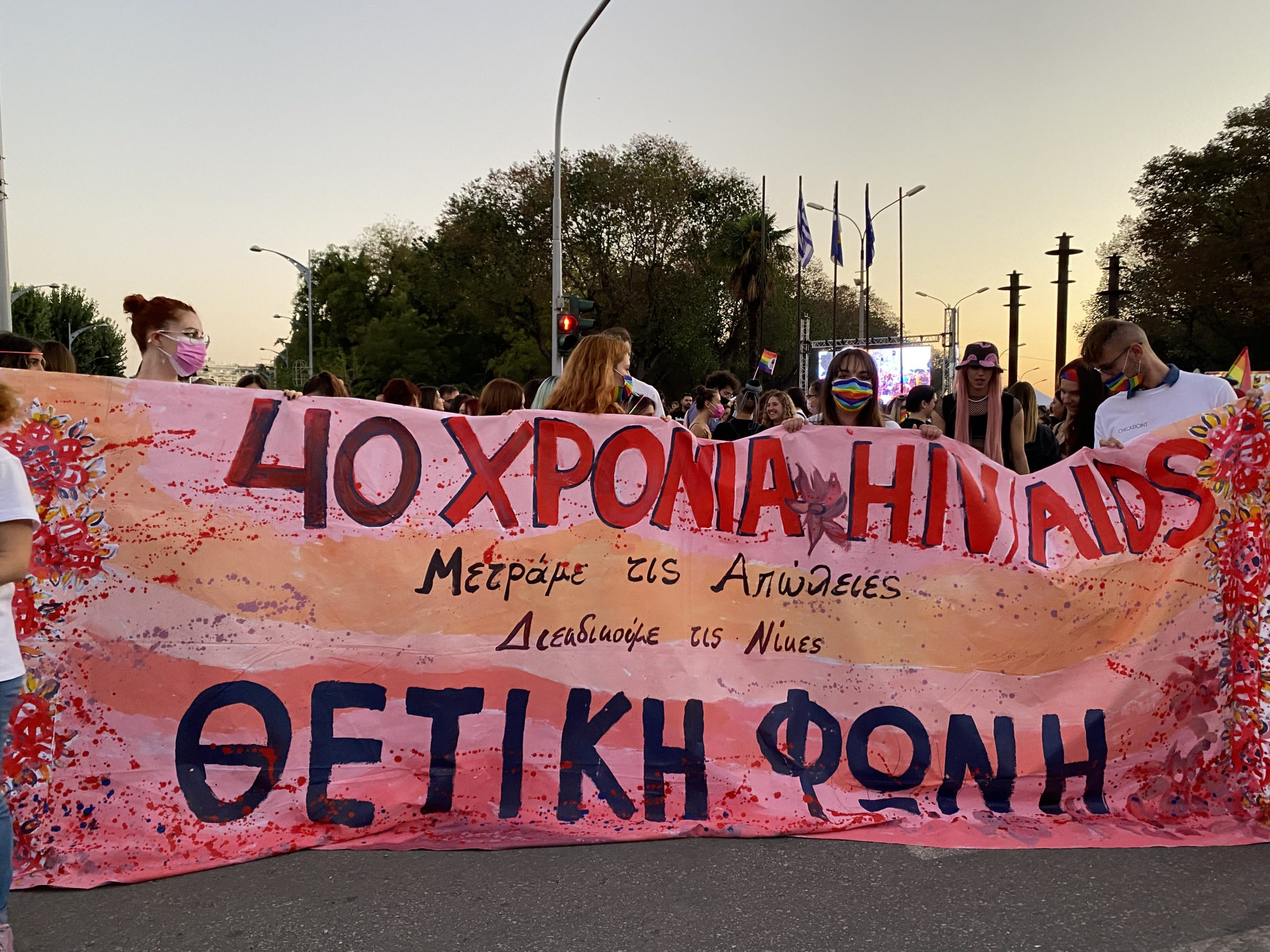 Thessaloniki has a lot of pride in its Pride. There’s a lesson in that.

It wasn’t a celebration, it wasn’t a parade, it was a demonstration in full force, telling the rest of the world that even in Europe we still have so much to learn.

Thessaloniki, Greece’s second largest city, is a city of youth, or at least it might seem that way on the surface. A roman style street layout encapsulates the inner city in a functioning and impressive verticality that allows anyone looking out at the crystal-colored Aegean Sea to look back and see the high-quarters along the mountain, like some kind of 3D postcard. It works. It’s damn pretty.

Besides that, the beer is especially cheap, local, and tastes faint enough that any well-meaning Dane would struggle to avoid mentioning it. The universities are gathered togetherin the same area; as are most of the main attractions, including the landmark White Tower, which also features in all the materials of Thessaloniki Pride.

Having effectively rebranded a tower said to have been red with blood from prisoners, it is now a staunch lesson in ‘keeping it clean’ as a sign of coexistence. And, similarly, Thessaloniki Pride is not without its diversity. 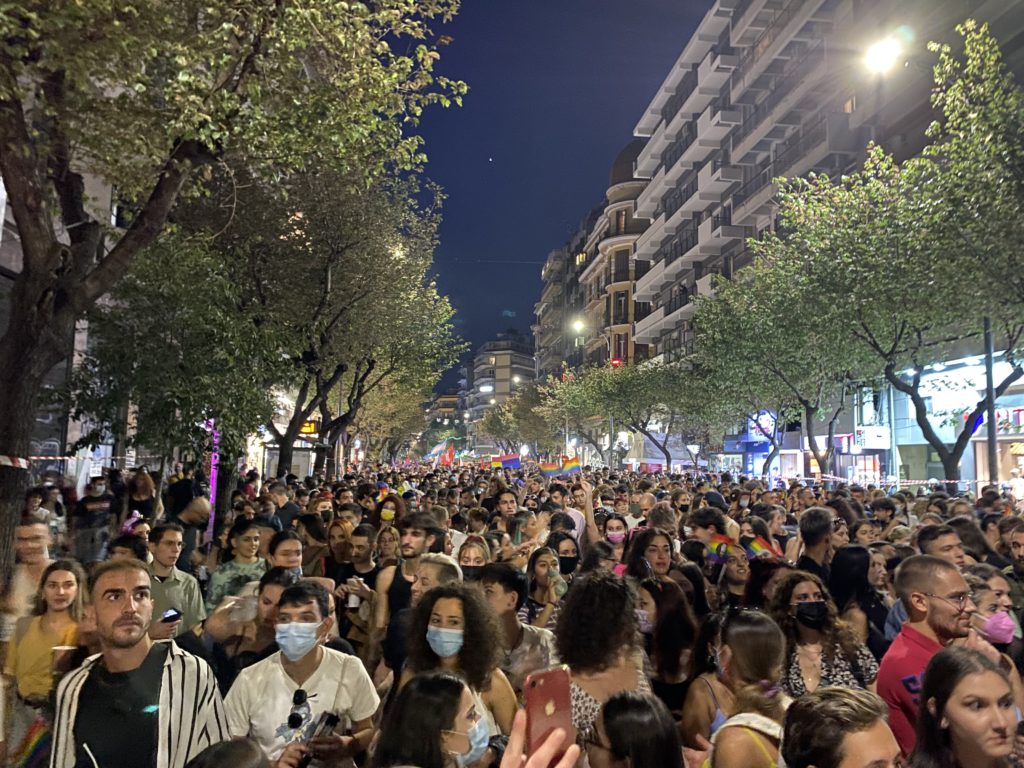 Spirited and in your face

Though not exactly invited, the Marxist party had banners that resounded near war-cries of political slogans, calling on justice for transgender people and victims of police brutality. The police had batons at  the ready at main intersections, just out of view — but it was quite clear that everyone knew they were there. Cameras were flashing and the streets were just wide enough that it forced pretty much everyone on the sidewalks to either follow the crowd or go along the many parallel but less efficient side streets. It was in your face, and as smoke clouds matched the angry orange lights of the low-cost streetlights of a Mediterranean summer day turning to evening, you could easily get the feeling that you were part of something.

Thessaloniki is not a rich city. Unlike Copenhagen or Sydney, it takes about 20 minutes by a bus that is designed to be late to realize that the fundamental infrastructure of Thessaloniki is a mixture of tourism and new-age blue-collar jobs. Not that the rest of Greece is much different. Similarly, the best looking and most expensive buildings in the city are still, without question, the Orthodox churches that dot the land — and curiously, you don’t see any black-clad Fathers in the parade. Though maybe they switched out cloth for leather. There was a lot of leather.

And still, though I had the chance to be just a speck in the parade with an Erasmus+ project, I still felt more inclined, more enthused, more believing in that loud and sporadic atmosphere.

It’s not clear what brought it on, and depending on the kind of neon pink steampunk goggles you’d wear (I believe they were handed out), you could read plenty into it.  Was it the fact it was entirely a ‘youth’ thing? That though the organization is generally the same age as that of Copenhagen Pride, they took a clear backstage, but didn’t avoid highlighting the Stonewall-era first-movers that still hung along near the front?

Was it the chaos? There is something to be said about demonstrations that felt more like an argument than a celebration — there was a distinct Black Lives Matter vibe to the whole thing, and a strong number of banners did mention BiPOC identities.

The matter of identity was certainly there, and it’s not entirely accidental that every truck had some kind of double minority on it. So was the language — a mixture of English and Greek that was both hip… But also a more Green-Anarchy style. If all that took place in Copenhagen, one might be tempted to assume we were all members of Antifa. But it’d not do it entirely justice to put on one’s sociologist, philosopher, or scientist’s hat, and analyze a just-as-complicated system of choices that led to what made Thessaloniki Pride strangely more electric than what I’ve seen of both NYC, Paris, or Copenhagen.

Instead, the one thing I got out of speed-questioning a few members about their opinion, as well as barraging my local Greeks with all kinds of pointless questions, was that there was a distinct pride to the whole thing.

It was a chin-up sort of affair; even as the whole thing ebbed out at the White Tower and the amphitheatre began hosting more evening thank-yous, there was a kind of smirk on everyone’s faces that I don’t think is entirely Greek or entirely Pride. Even as about an hour into the parade reaching its final stop, a full-on brawl between police and some furious men of some kind of alignment had ensued, there seemed to be an overall sense of ecstasy in the constantly lively inner city.

And that might be just it. There, in that evening, people weren’t afraid to be more than a little proud that the whole thing even got together, but more importantly, that they had the guts to do something after a year of isolation and listening to more and more conservative and Trumpian arguments telling us we ought to go outside when our moral standards told us no. The fact that it made sense for a few hours. That the rampant transphobia, hypermasculinity, and xenophobia had literally no space to talk.

It wasn’t a celebration, it wasn’t a parade, it was a demonstration in full force, telling the rest of the world that even in Europe we still have so much to learn, and that it doesn’t have to come through snide remarks or ‘being better’ because the organization chose its sponsors carefully. Every partner was a civil-rights movement, and besides being sponsored by the Consulate of The United States and Heineken, we were free to blame it all on capitalism and the like.

It wasn’t an accident that the two political parties that seemed to be included and, my Greek attaches told me, the only ones being listened to, were both deeply red. This was class-oriented disillusionment with the way that things were run, and today it was for the Gay and The Transgender, both of which still have awe-inspiringly harsh names in Greek.

I still chuckle about how a classic insult in Greek literally translates to “Fuck your Virgin Mary”, but looking at Thessaloniki Pride, I think I get it. 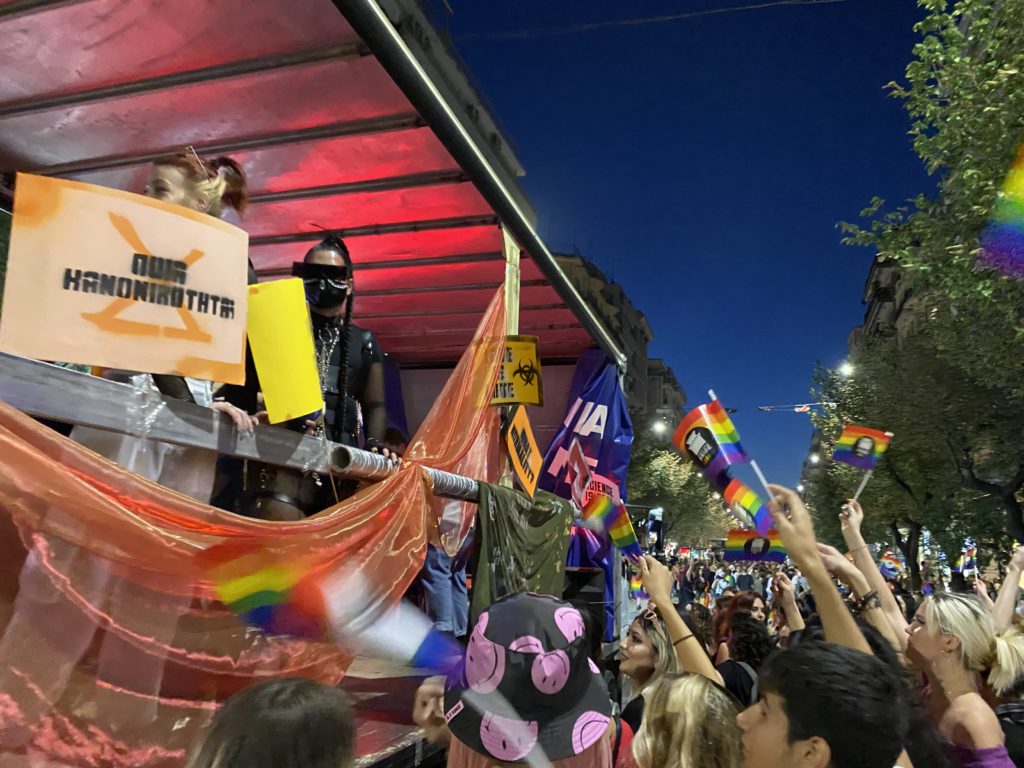