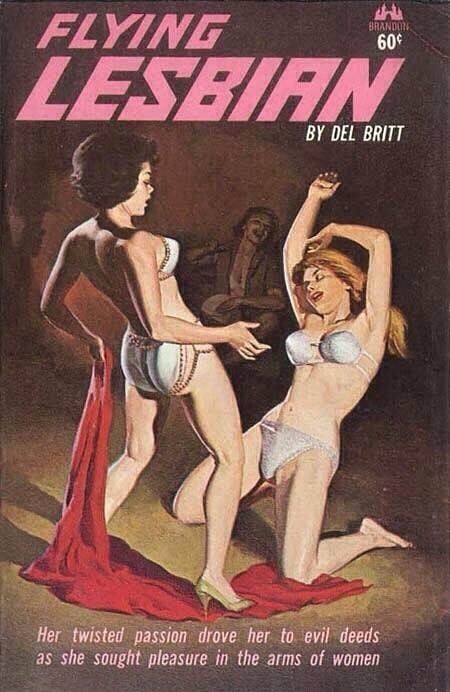 Will I ever find the real me?

If representation in pop culture and media still leaves a lot to be desired, imagine being a lesbian in the 1950s: The chances of seeing your sexual identity pictured was slim to none. But that changed when the book genre pulp fiction – mass-produced cheap paperbacks with a focus on raunchy content – created a market for quickly-consumed literature. While the portrayal of the lesbian lifestyle was overly crass and hyper-sexualized, the literary representation also acknowledged that non-straight women existed – and that the possibility of creating one’s own life outside heteronormative standards existed.

Such is the way author Katherine V. Forrest describes coming across her very first lesbian pulp book in a seedy corner store back in the heydays of the 1950s. To say that the moment was formative is to downplay the effect: Forrest went on to write the novel Curious Wine (1983), considered now to be a classic in lesbian literary history.

Her words summarise the ambivalent feeling that the entire lesbian pulp fiction genre sparked as an emotional reaction among queer female readers; on one hand, the descriptions catered to a straight male audience (The Gripping Story of Hilda, Whose Twisted Desires Led her to Brink of Degradation… anyone?), allowing salacious glimpses into an unknown twilight world, where women indulged in sex with other women, while on the other hand, they also acknowledged that lesbian sexuality existed – and that the notion of a lesbian identity was able to be embraced by women still in the closet, young as well as old.

The covers were hard to ignore: Scantily-clad women lusting after each other left little doubt as to what would take place upon the pages. With titles such as Satan Was a Lesbian, Forbidden and Sin Girls, it was safe to say that it was also a particular presentation of female relationships, which could be found in the books.

The representation ended up being a double-edged sword: At the same time as the emotional and physical attraction between two women was described as existing and the passages didn’t shy away from devolving the sexual aspects of the unions, the relationships were also consistently brushed off as being ‘juvenile phases’ or plain out ‘unnatural’. By throwing in deaths or insanity at the end of the stories for the main pairings, the publishing industry emphasized that the wished outcome was not to see the female couples end up together at the end – but rather for them to have a titillating good time for the voyeuristic readers.

When lesbian authors joined in writing books within the market, the portrayals took on another form – for instance, author Ann Bannon, crowned “Queen of Lesbian Pulp Fiction”, ended up giving a voice to repressed queer women with her Beebo Brinker Chronicles (1957 – 1962): In Bannon’s six books, there were no deaths, no unhinged women, or descriptions of lesbianism as sinful or bad at its core. There’s plenty of highly entertaining melodrama, though, which keeps you engaged throughout the entire series, in which we follow the characters of Laura, Beth, and the titular butch Beebo Brinker.

Take the scalding romance between college-aged Beth and Laura in the first book in the series, Odd Girl Out – fear of rejection and overpowering attraction duel each other in the page-turner, but the young lesbian Laura is never depicted as depraved, and the girls’ connection isn’t deemed morally reprehensible. Rather, Laura is a brave young woman, heading off to New York at the end, when she realizes that she can’t fight her own identity anymore and wishes to live it to the fullest. She heads for the big city to find like-minded people in the gay community. She bids Beth goodbye at the train station with the bittersweet words:

“I know what I am, and I can be honest with myself now. I’ll live my life as honestly as I can, without ruining it. I can’t do that here and I can’t do it with you.”

The Great Escape from Heteroville

Laura is a fictional character, but that doesn’t change the sentiment that is underlined in Odd Girl Out: Lesbian pulp fiction became a way for small-town lesbians to find ‘guidebooks’ for living their lives most truthfully. By being presented to the gay bars and neighbourhoods in the bigger cities, by getting insight into the dating etiquettes and styles to adopt to pick up other ladies, young women were able to gather the courage to leave a set housewife pathway for them – all because of lurid books, that still presented a means to escape heteronormative suburban life.

Lesbian pulp fiction was an ambivalent gateway, but it offered a functional ‘key’ to lesbian identity, nonetheless. Katherine V. Forrest sums it up pretty neatly:

“Whatever their negative images or messages, they told us we were not alone. Because they told us about each other; they led us to the end of the isolation that had divided and conquered us. And once we found each other, once we began to question the judgement made of us, our civil rights movement was born.”

PrevTidligereIntroducing: The HeartCore Reading Room
NæsteExpectations for a happy lifeNext