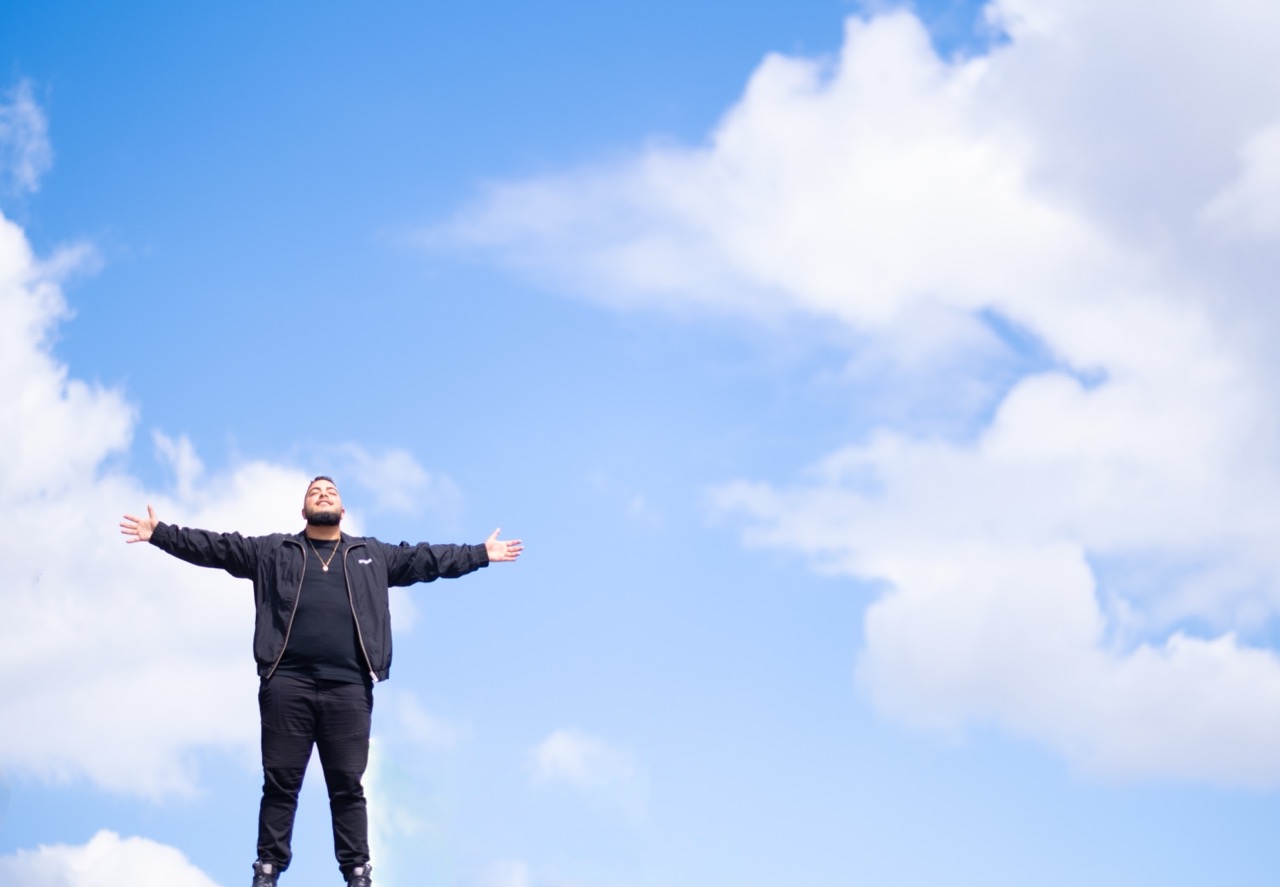 With a hand on his heart: Meet Jalal

Like many others, you may have watched DR’s documentary series “Macho”, which follows Jalal for a year and a half of his life as a transgender Muslim man, living with his partner Mie. If you have, you have a pretty good insight into his life (at least a better insight than he has into yours, dear reader). But if, like me, you would like to know more, read on. I sat down to have an (online and Corona-friendly) conversation with Jalal, where we got the chance to discuss trivial things, like what actually happens when you open up to all of Denmark about your gender identity? Did top surgery live up to his high expectations? Why is it that the Danish healthcare system does not seem to care about mental health, but is obsessed with BMI? And why is BMI not a good indicator of physical health?

First, I need to ask Jalal what it’s been like since “Macho” came out. I mention that it seems like a huge step to come out to all of Denmark at once. Jalal bursts into laughter and with a broad smile says: “all or nothing.” He explains to me that coming out this way was very liberating: “It has given me a lot of freedom. You are accepted 100% for who you are and I wouldn’t trade that for anything.”

Summarizing, he explains, “I’m actually very overwhelmed by all the positive responses I’ve received. I seriously expected to get death threats in my DMs and on Facebook. But I haven’t received a single one. It’s just been people stopping me in the street to congratulate me. It’s a huge cadeau to me and it makes me so proud. It goes to show that sometimes we just have that fear inside of us.” Jalal, who hasn’t stopped smiling since the start of the interview, says it’s not just people in the street who have praised him for the series: “There are some public people in the LGBTI+ community that you have heard of and that you know, and when they write to you and send you love and respect, it just feels so…” Jalal puts his hand over his heart and holds his breath for a moment. “It really warms my heart,” he explains in a gentle tone.

But what does it actually mean for Jalal to be included in the LGBTI+ community? And more pertinently, what is the difference between being an anonymous member of the LGBTI+ community and suddenly being a representative that practically everyone knows about?

Something that mattered a lot to Jalal was the need for top surgery. In “Macho”, Jalal referred to top surgery as the ultimate solution to all his problems – almost to the point where as a viewer (at least this viewer) you felt like you should be warning him that it might not be. Jalal assures me that I was not alone in feeling that way.

“A lot of people told me to be careful and that maybe it wasn’t everything I dreamed of. But I knew it would be. It would only be a good thing. It’s changed my life in every way imaginable. When I sleep, when I shower, when I’m out in public, when I’m talking to you right now. If I hadn’t had my top surgery, I think I would be sitting like this right now.” Jalal reaches out and adjusts the screen so I can only see him from the neck up. “Now I’m like ‘HEY!’” he says with a huge grin while quickly readjusting the screen, waving his arms enthusiastically above his head. “Top surgery has changed so much for me, because living without it was a huge strain for me. It was the biggest tension in my life. It was what I call a ‘living hell’. It was horrible. So yes, it has changed my life in every way, only for the better. I knew the feeling would be good, but I didn’t know it would be so, so, good.” Jalal finishes the sentence with his hand back on his heart – an action that emphasizes the gentle intensity of his last sentence and leaves you with the feeling that his top surgery has given him a new appreciation for life and its possibilities.

But it wasn’t easy getting top surgery in Denmark. As anyone who has ever been in contact with the Danish healthcare system knows, its processes can be rather complicated and difficult to navigate, especially for people who are not cisgender or inhabit privileged bodies. This was the case for Jalal, when he was denied top surgery because his BMI was too high.

“I don’t think I will ever forgive the Danish system because it is their fault that I have had suicidal thoughts. It’s their fault that I’ve been miserable. It’s their fault that I’ve lived in misery for five years and I felt bad for so long. Everyone could see that I kept gaining weight. No one was offering to help me find a dietician or anyone else who could help me lose weight. There was no help to be had. I was left to my own devices, ordered to lose 45 kilos. The doctors didn’t care how I did it, as long as I lost 45 kilos. At one point, I was considering getting a gastric bypass because I was so desperate.  What frustrates me the most, is that, yes, I know I’m big. Yes, I would like to lose some weight. But I really don’t want to be thin. I’m comfortable with my broad shoulders. I feel good about my round belly. I explained this to them and no one listened to me. When I started at the Sexological Clinic at Center for Gender Identity, I had a psychiatrist who agreed to send a letter to Rigshospitalet [where the Sexological Clinic is situated], which said I would sign a statement attesting that I was indifferent towards the aesthetic outcome of the scars. I’m getting tattoos which will cover them anyway. She tried to talk to the hospital, but my request was still refused because of the plastic surgeons who prioritize getting what they consider to be an aesthetically pleasing result.”

Jalal breaks off for a moment and looks at the ceiling with a frustrated expression.

I can’t help but comment on how absolutely arbitrary it seems to gatekeep an entire healthcare system by using a standardized measurement that has been criticised for being an oversimplification of health, because it’s based on white, cisgender, male bodies. After all, some of us don’t fall into that category. (Read for instance ‘Fat Is Not the Problem – Fat Stigma Is’ by Linda Bacon and Amee Severson in Scientific American, 2019).

Jalal nods enthusiastically and my comment seems to fuel him with determined energy, prompting him to continue the conversation.

“I talked to an anaesthetist in Germany and a doctor in Miami because I wanted to ask them why plus size people can’t have the surgery. How dangerous is it for your health? Because I would accept it if they said, ‘it’s life-threatening.’ Okay, then I get it. But it’s not. It’s not life-threatening. Of course, surgery comes with other risks for plus size people. But those risks are based more on the aesthetic outcome rather than actual medical concerns. It annoys me because I don’t think it’s okay. I don’t think it’s okay at all. I’m twenty-six today, but I could have had surgery at twenty. At nineteen, even.”

Eventually, Jalal reached out to Dr. Ute Ebert at St. Josef-Hospital in Germany to book an appointment for his top surgery there.

“When I got my date for top surgery I was really happy and the documentary shows that. But in the days following, I was very frustrated. Apparently, many Danish transgender men have been there, and I didn’t know that. I didn’t know that Dr. Ebert didn’t look at BMI.” Jalal wishes he had known that going to Germany was a possibility. It is unfortunately not an option for everyone, since it requires that you pay out of pocket, but it was nevertheless an alternative. Something he felt like he had been without for years.

And to Germany Jalal went, despite COVID-19 and the cynicism of the Danish healthcare system.

“I had been looking forward to it, but when I was in Germany after my surgery, I was both really happy and really sad. I was very vulnerable, because I felt extremely alone and abandoned by the Danish system,” Jalal explains, and it’s not hard to imagine what it must be like to wake up alone after a surgery in a foreign country.

“I was actually very frustrated because it went so well. I was upset because this could have happened five years ago. I got really nice scars and I had a successful operation. So, what was the problem? Sure, I’m overweight, but at the end of the day it did not make a difference for the aesthetic quality of my surgery. I was sad and frustrated. But I’m very grateful that I was able to go to Germany and have the surgery.” He smiles his sunshine smile and it’s clear to see that I am sitting in front of a man who is comfortable in his body.

Rest assured, dear reader, that Jalal and I talked about many other things during our conversation (which was really almost more of a chat). I wish I could give you more insight into how wonderful and gentle a person Jalal is. But Jalal  guaranteed me that he tries his best to answer everyone who sends him DMs – so you can always try to reach out to him yourself. Otherwise, I recommend you keep an open eye on his social media accounts for future stand-up shows and talks, which I’m sure will be absolutely fantastic.