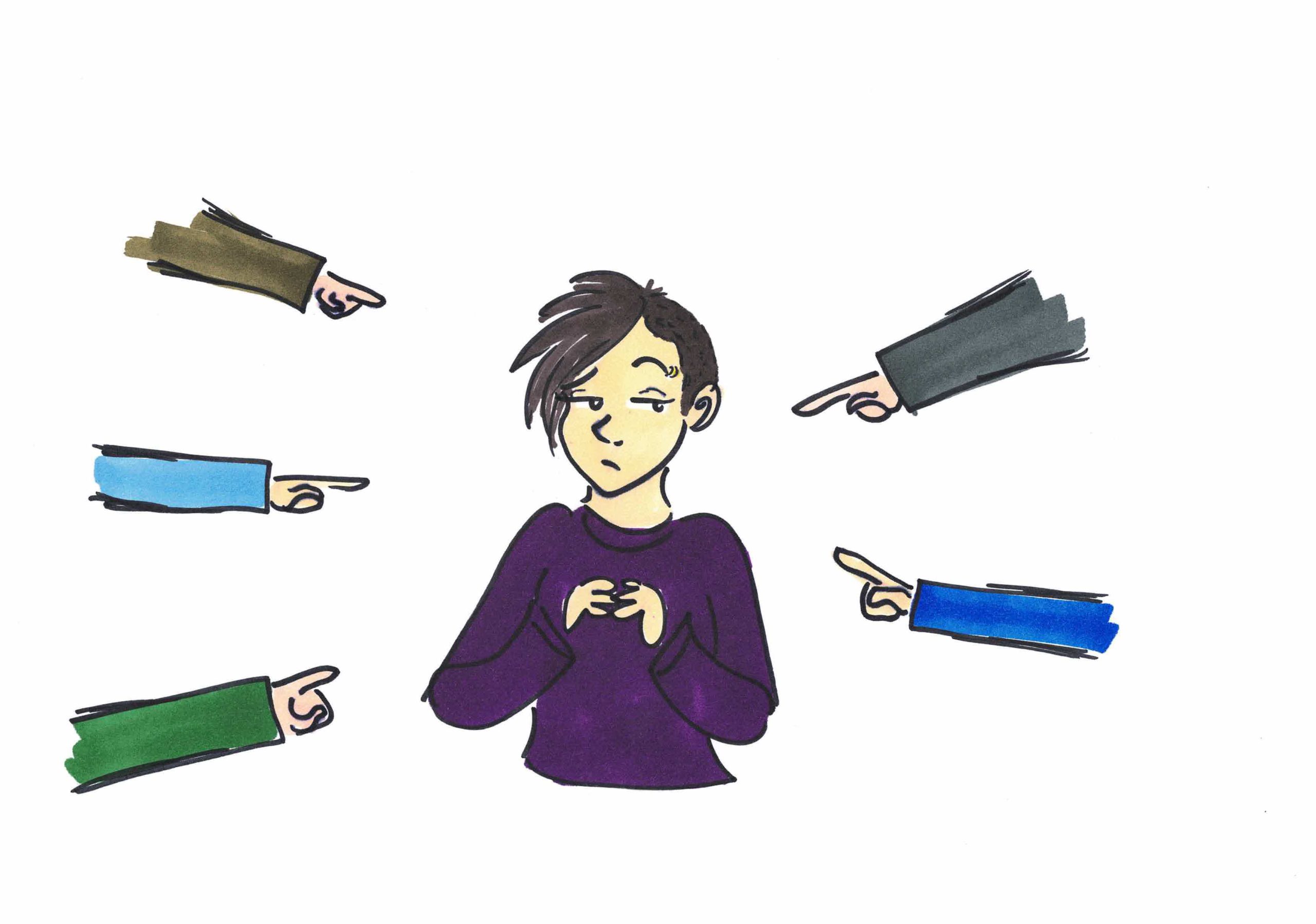 ”I just want to feel respected as a whole person, whom there isn’t something automatically wrong with, or who is up to something in the eyes of others.” That is what Vee (genderfluid) says when I ask them about what makes them feel included in a group of allosexuals. Like many of the others, they have chosen to remain anonymous in this article.

”You don’t belong here.” An imaginary door shuts, while a just as made up neon sign goes out. I glance towards the other side of the road, where the blinds have been drawn. There I was welcome, as long as I was quiet. I shuffle down the road, too queer for the heterosexuals and too straight-passing for other LGBTI+ people. It doesn’t rain, that would be a cliché. I leave the bar, the one with rainbow-colored sign, and the one with the monochrome decorations. I find my way to the internet café around the corner. It is here that we find each other. There are so few of us, so few that know what we are.

”Asexuality wasn’t even mentioned in sexual education. It was okay to feel desire, but it wasn’t okay to never feel it,” says Vee, when I ask them over Facebook about what thoughts they had on exclusion before they knew that they were asexual. Lotte (she/her) has felt the impact of that inequality: “It’s also hard to process all that pain that has been involved with being asexual in an extremely sexualised society like the Danish one.”

I lean back in the chair and rub my face, because I have heard it all before – and experienced it, unfortunately. As an asexual, you are the oddity. Luckily, there are many who are welcoming. But one is always trapped in no-man’s land. “It feels good to call myself queer,” Lotte goes on. But then she continues: “I have otherwise never done it, because I don’t know if it’s okay that I, as an asexual, identify myself as queer.”

The LGBTI+ community is known as inclusive. But as it was pointed out to me a few weeks ago, there is a double standard. Very few LGBTI+ people want to be sexualized. But still, there are many who themselves sexualize LGBTI+ persons. Lotte puts it into words: “Their sexuality is rooted in a sexual attraction to other people. That’s why I can feel as excluded among LGBTI + people as I can among allosexuals.”

But when reversed, it doesn’t work. “[…] When you tell others that you have no sex drive, you will be looked at very strangely, and as if you are completely abnormal,” says Rikke Ishøi (she/her). And that is actually the biggest obstacle many asexuals encounter in everyday life. Some of the only representation “we” get on TV is a result of illness. It’s apparently cancer that is causing our lack of sex drive. Or depression – even though many asexuals are happy people. “When I have felt comfortable being open about it to friends, I have been asked about everything from whether I have a disease, to whether I am sexually attracted to objects or animals,” tells Vee. “I keep my orientation hidden from all types of healthcare professionals, as I am afraid that my orientation will be reduced to symptoms of something that has to be cured.”

It is for the same reason that many of the people I have interviewed would rather not share their surname. “I also didn’t think much about the underrepresented letters, precisely because there rarely was focus on them.” This is what Christina Ebbesen (she/her) says when I ask her what she thought about exclusion before she knew that she was asexual.

Asexuals exist. We are not plants, we are not snails, we are not ill. But we are underrepresented. That results in many people not believing in our existence. Because if one has never heard of something, then it’s something new. Even though historical figures like Tesla and Marilyn Monroe are speculated to be on the asexual spectrum. No, asexuality was invented in 2007, everyone knows that!

So when the imaginary doors shut, because asexuality is an invisible orientation, it hurts. “I have been told that asexuals are not welcome at pride events,” tells Vee, “a standpoint that changed when they heard that I was biromantic.” But what harm does it do in the big picture? Lotte has a good example of that: “When guys flirted with me, I never knew what to do with myself, because I was afraid that they would want to kiss me or suggest that we should go home together […] In such situations, I have been so uncomfortable, and I have gone home crying.”

I turn off the screen at the internet café and look around. There aren’t many of us – 1-4%, depending on whether you ask Welling from 1994, or GLAAD from 2017. At best, it is still 1% more than people that identify exclusively as homosexual. But it’s just that. Many asexuals experience split attraction. It means that one’s sexual identity doesn’t match the romantic. An asexual person can be heteroromantic, homoromantic, or something else. Some have sex with their partners, either to make them happy, because they themselves enjoy it, or because “it’s just something you do”.

There are many of us. But there aren’t that many people that see us – and that’s why there are many of us that never see ourselves. Many asexuals feel comfortable and welcome in the LGBTI+ community. But there is still a big group that doesn’t know where to stand. Because whether you enter through the door of the monochrome bar or the rainbow-colored one, you will encounter sex, sooner or later, in one way or another. See, for example, HeartCore’s last magazine cover. As a sex repulsed asexual, I’d never dream of picking up the magazine. The front page had a large, bright headline on a dark background that refers very directly to sex with the word “Kinky”. There must, of course, also be room for that. But for someone who is sex repulsed, it is an immediate red flag. I love the LGBTI+ community, I love being queer, and I believe that people must be allowed to do and express themselves as they please. But imagine that you have a hearing that’s better than everyone else’s. And everyone else is obsessed with bells. They play bells in commercials, and in movies, in music, in art, they play with bells in daily life, when they speak, and sometimes there are even references to bells hanging in the streets.

“I don’t really have anything against our sex-fixated world,” says Christina Ebbesen. “If only I could be free from having it thrusted upon me”. It is here that one of the biggest problems lies. Sex is such a big part of our world that it’s not okay to need a break. Then you are hypersensitive. Touchy. Prudish.

So what can one do about it? First and foremost, you can keep in mind that the A in the alphabet mafia acronym stands for Asexual, Aromantic, and Agender (people who don’t identify themselves with any gender identity). Next, respect it when someone says that they are experiencing discomfort with the situation. Sex is so common that some have a hard time turning it off in everyday conversations. We just want to be seen and heard. So listen to us. Many don’t feel that we belong anywhere. Let us be included.

Asexual: Someone who does not experience sexual (physical) attraction towards others. Asexuals can absolutely fall in love and me in the mood for sex, just not with specific people. Asexual is an umbrella term and there are many ways to be asexual.

Aromantic: Someone who does not experience romantic attraction towards others. Aromantics are not always asexual

Allosexual: Someone who is not asexual. Can be heterosexual, homosexual, pansexual, or something else.

Alloromantic: Someone who isn’t aromantic. Can, like allosexuals, identify with any other romantic orientation.

Sex repulsed: Someone who is revolted at the thought of sex. Often does not care what others do, as long as it is not imposed on them.

Sex favorable: Someone who likes sex and likes to have sex.

Sex indifferent: Someone who does not care about sex. They do not need it, but do not mind it either.