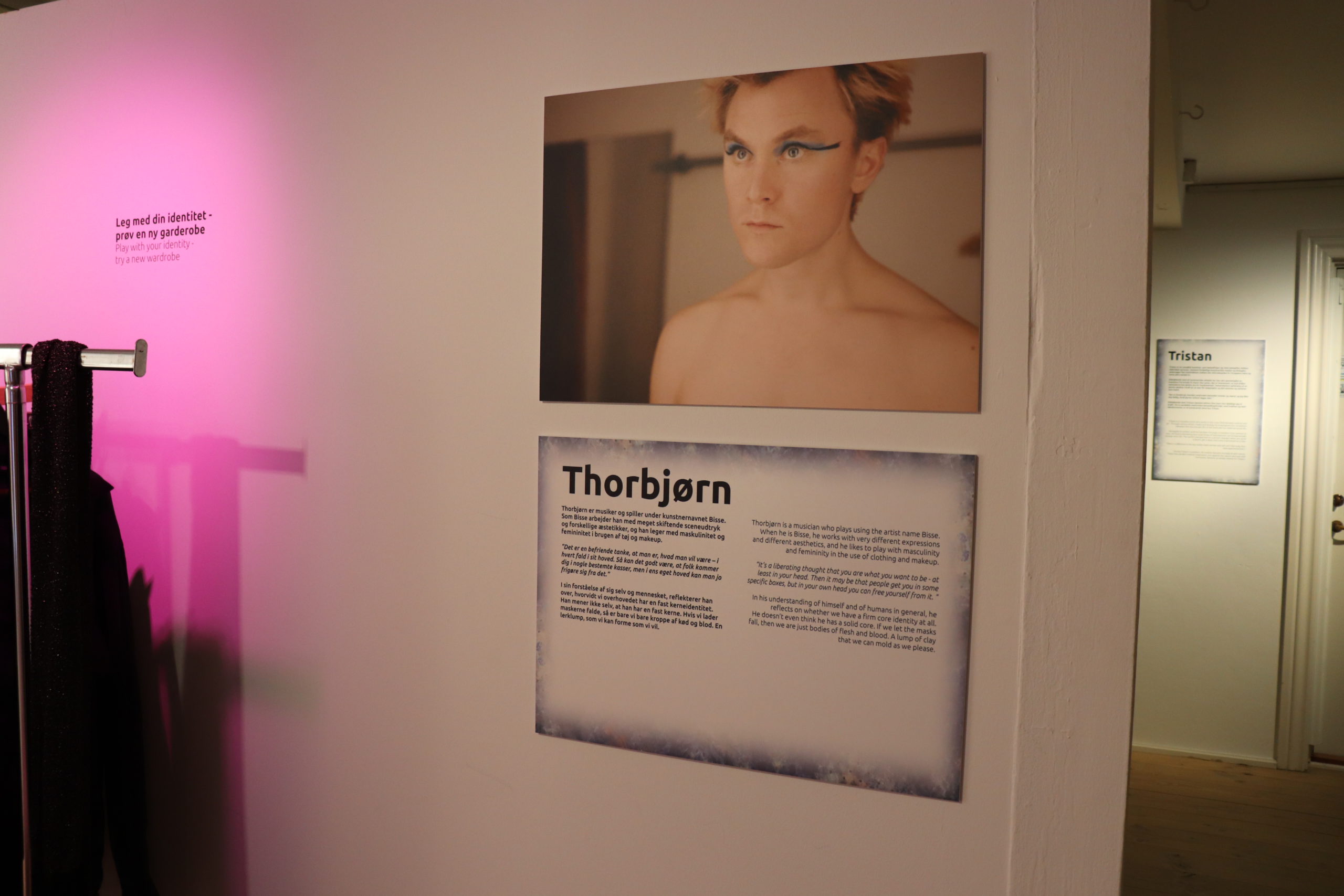 How do Danish museums portray and convey LGBTI+ history? Is there a need for a focused LGBTI+ museum in Denmark to cover the history? Or are the subjects already being covered at the existing museums? Here are examples of how some Danish museums work with, and convey, various LGBTI+ topics.

Julie Rokkjær Birch is the museum director of KØN – Gender Museum Denmark, a museum for cultural histories of genders, formerly known as The Women’s Museum. As the Women’s Museum, they worked to increase the visibility of women’s cultural history, including everyone who identifies as a woman. Julie describes how the museum was created as a response to the lack of inclusion and the blind spots in the storytelling in the Danish museums.

“Museums are our shared home – our common thread – and everybody should be able to see themselves reflected in the vast landscape of stories told at the museums. Gender Museum Denmark’s beginning as the Women’s Museum in 1982 was about making the cultural history of women visible. Women have left behind few traces and most of the history is written by men, about other men. At Gender Museum Denmark we believe that women deserve to be visible in EVERY museum and not only represented in ‘minority museums’. Over the years, the museum has contributed so much to this cause, and this has led to the museum now entering its next phase of life where we focus on gender in a broader perspective, on relations between gender and what gender has meant at different times – for all of us.”

The Women’s Museum officially changed its name to KØN – Gender Museum Denmark in 2021. A change to reflect the 2016 expansion of the museum’s thematic area of responsibility to cover the cultural histories of gender. On their website, they describe how Gender Museum Denmark, among other things, wants to be leading dialogues on the importance of gender. How they want to create insight and strengthen the will for an equal society. The new area of responsibility means, among other things, that the museum works with historical and current changes in the conditions and relationships of genders. Communication about the LGBTI+ community, with a focus on gender, gender equality and diversity, has a place in the permanent exhibitions, collections, and activities. This can be seen in the permanent exhibition Køn redelighed//Gender Blender, which opened in March 2017. The exhibition focuses on the importance of gender in society. Julie describes how they approach the work: “We proudly carry on our activist heritage and break taboos, seek boundaries, we provoke and encourage debate about the importance of gender – historically, presently, and in the future.”

Between October 2019 and January 2020, the museum hosted a large special exhibition, FLUX. An interactive exhibition about dynamic gender. The premise of the exhibition was the interactive documentary ‘Flux’, made by director Suvi Andrea Helminen. In addition to the documentary, the exhibition included sound stories, objects, and a collective installation. Here, visitors could contribute by sharing their own thoughts on the role of gender in the future. The exhibition currently exists online.

In addition, the museum actively engages their users. They offer sex education with focus on sexual equality. They regularly host various events, and you can always see them as part of Aarhus Pride with their Pop-up cart.

The National Museum of Denmark

Mette Byriel-Thygesen is curator at The National Museum of Denmark. Sexual history and gender equality are some of her areas of work. Mette describes how the museum works with inclusion of the LGBTI+ community in their “collection of objects, storytelling, and teachings. With a general prioritization of collaboration, and sparring with interest groups.”

They have a collaboration with Sex & Samfund to create teaching materials for ‘Uge Sex’, an annual sex education campaign for primary schools. They also offer courses on sex, body, and gender. These are also amongst the topics in the podcast Sexhundredetallet, hosted by journalist Louise Lindblad and Mette Byriel-Thygesen. They delve into today’s sexual phenomena as well as the cultural history of sexuality. Examples of topics are fluid sexuality, consent law, and asexuality.

The year 2021 is no different, as the museum also has events planned during WorldPride. Among other things, the museum will offer special guided tours of the museum’s collection. They will participate in a debate about which objects should be collected and preserved, as well as discuss homophobia in the Danish sports world. See the info box for details.

Back in Aarhus again, we also find Den Gamle By, a museum with historic houses, live role players and special exhibitions and events. The museum welcomes its guests in both homes and shops. Here, guests can experience how a section of the Danish population could have lived during the last 500 years. The director of Den Gamle By Thomas Bloch Ravn describes how the museum works with diversity:

”Den Gamle By is a museum that works to show the historical reality as it really was and in recent years, we have increased our attention towards diversity in the broader sense. This applies socially, where we, among other things, had a homeless person living at the museum so that the audience could visit the person and see their ‘accommodation’. This applies ethnically, where we exhibit the home of Turkish guest workers, a home of a Greenlandic student and currently we are working on a Jewish brush binder’s home and shop. And it applies in terms of gender and sexuality, where we have exhibited LGBT posters at the Poster Museum in connection with the anniversary of ‘Forbundet af 1948’ and have documented the home and daily life of a ‘rainbow family’ that will be included in the museum’s 2014 street, which is set to open at the end of next year.”

The upcoming 2014 street will feature two homes and a handful of shops. One home will show a family home for two women and their three teenagers. To ensure authentic interiors of the upcoming home, the museum has partnered with a rainbow family. The family have agreed to share their everyday lives in 2014 with Den Gamle By. The museum must recreate their home as accurately as possible. To achieve this, people from the museum visited the home in 2014. Here, they interviewed the family and photographically documented the home in detail, from the alternative décor in the teen rooms to the spices in the kitchen.

The rainbow family home will be a combination of recognizability and dissimilarity. The guests can recognize some items from their own home, and other items will stand out. With the home, LGBTI+ families rightfully become part of the many stories from Danish society to be experienced in Den Gamle By.

Among the museum’s many houses, located directly opposite “The Aarhus Story”-exhibition, in the 1974 district, we find the Danish Poster Museum. The museum contains both a permanent exhibition of iconic posters as well as changing special exhibitions.

One of these special exhibitions was “Under the Rainbow. Danish LGBT-posters through 70 years”. The exhibition opened in 2018 on LGBT Denmark’s 70th-anniversary. The academic employee Line Fogh Sørensen was the curator of the exhibition. She was tasked with putting together the exhibition in its entirety and a series of exhibition tours while it was at the Danish Poster Museum. According to Line, the exhibition was a hit amongst the visitors:

”The anniversary gave the Danish Poster Museum a good opportunity to show its collection of LGBTI+ posters, as well as tell the stories of the many LGBTI+ associations that through 70 years helped bring the minorities from the shadow side of society to the light as an increasingly equal population. The exhibition was welcomed by the LGBTI+ community as well as by other visitors to Den Gamle By, where especially guided tours with subsequent coffee and cake targeted at the LGBTI+ community gave great insight into, and identification with, the common history.”

Several of the posters for ‘Under the Rainbow’ were already in the Danish Poster Museum’s collection. Posters are collected on an ongoing basis, focusing on many different topics that highlight distinctive features of a specific time. In connection with the special exhibition, the museum’s collection of LGBTI+ posters was increased, and will continue to be so. According to the head of the Danish Poster Museum, Elsebeth Aasted Schanz, they continuously collect new posters that put the subject in perspective: “I consider the collection of the posters in question on equal footing with our general collection, where we try to reflect society broadly, so posterity, by delving into our collection, can get some angles on the history that has preceded it.” Although there currently are no plans for a new special exhibition of LGBTI+ posters, some posters can easily be included in other contexts in upcoming exhibitions. The museum is also open to lending posters from the collection to exhibitions elsewhere in the country.

A question to the reader

It is part of the task of museums to reflect the society we live in, and LGBTI+ people are a part of that community. Museums can be actors for social change. Through critical communication they can work with potentially difficult topics. They can find different angles from which to ask questions – without providing the answers. Furthermore, they can engage in dialogue and raise public awareness.

Is there a need for a museum dedicated to LGBTI+ history? A place where visitors can get an overview of the important events, a place for special exhibitions? A place where those who convey the history are especially aware of the LGBTI+ issues in society? Or is it enough, perhaps even better, that museums around the country pay attention to the blind spots in their storytelling? That those museums are active in cultivating diversity, that minorities like LGBTI+ people are given a voice? That LGBTI+ topics are given a place in the general narratives of our society, such as permanent exhibitions, special exhibitions, and events? Maybe a combination of a dedicated museum and a place at other museums? There is no doubt that there is enough material for many more exhibitions, more stories to tell, more issues to debate.

The National Museum of Denmark

Events related to WorldPride and EuroGames

Date and time: 12th of August at 5pm to 9 pm. Tickets are available from 1st of June at the museum website. Here, you can also find the program as it gets updated: billet.natmus.dk

Exclusive guided tours of the museum’s collections, debates, workshops, and music and much more.

Den Gamle By and the Danish Poster Museum